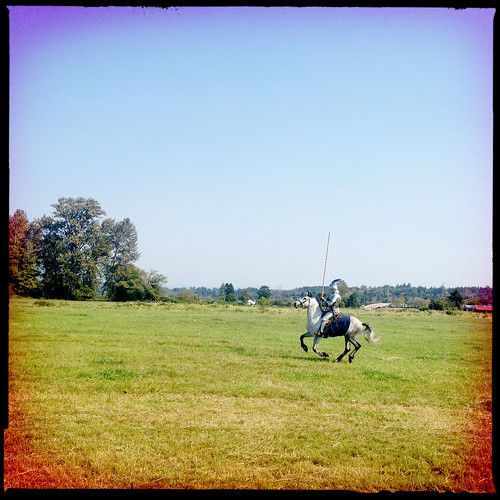 This weekend we witnessed multiple kinds of trebuchets used to hurl multiple pumpkins hundreds and hundreds of yards across some sort of field in the general vicinity of Everett. These were far more impressive (via olde timeyness) than the excessively powerful air cannon with a similar range that participated in the "watching pumpkins fly and die" portion of the Snohomish Festival of Pumpkins on Alexander Farm. Later, in preparation for semi-actual jousting, the field was gleaned of gourd scraps by children. Other features included LARPers selling their wares, butter-dipped corn, kids battling in a melee. The whole medieval times affair, which lasted less than two hours, was narrated by a viking with a wedding-planner/Madonna-style headset.

Sunday activities also included a sunny brunch on the new roofdeck at Terra Plata, a Michelada at Poquitos (among the best uses of fifty cents), and riding my usually decorative bicycle to an astroturf garden party.

Somewhere between Paris and Portland and the changing seasons, I picked up (and have been recovering from) some sort of allergy-related respiratory exhaustion plague (possibly related to the creepy haze that's been blanketing Seattle for days); so, aside from some coffeshop working and downtown shopping, the rest of the weekend was quiet (at one point, a basic cable marathon of the Damon-era Bourne movies became very appealing).