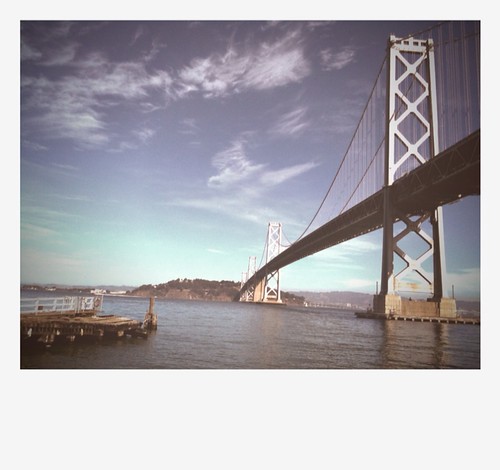 On Friday night we hopped in a club lit airplane and jetted down to San Francisco, mostly for the Treasure Island music festival with stops for desperation late Japanese or Salvadoran meals and morning bookstore cafe brunches. The festival was held on a little island accessed by a batcave exit from the Bay Bridge. It had a spectacular view of the city (for increased feelings of urban relevance), really nice pirate ship branding, and a pair of stages that never overlapped, causing the crowd to move tidelike between them throughout the day.

Saturday was more like a desert island, with the warm weather perfect for the electrokids and the dancier lineup (highlights = Passion Pit, Dan Deacon's crowd control experiments, the good MGMT songs, Girl Talk). Sunday was more like a ship far at sea with wind and fog and bundled and blanketed patrons (highlights=Beirut, the Walkmen, Flaming Lips -- the magic of the sincerity, epileptic lights, and confetti still work on me). We also spent a lot of time hanging out in a rickety covered wagon ship that was nevertheless surprisingly comfortable; particularly when you're with a stranger magnet. Next time, we'll have to make it onto the super awesome fast-moving light show ferris wheel. Mainly I never wanted to face the line.

On both days, wolf suits were plentiful. I wish that they had been selling them there, because underplanning meant that I bought a warm fuzzy souvenir hoodie.

I got back to my friend's apartment lateish last night, the phone systems having conspired to thwart our actually meeting up on the island. We stayed up for a while chatting over beer, then I woke up very early this morning to catch a train, rendezvous with the rest of the Seattle contingent at the airport, and spend a few hours sorting through pictures. Aside from things always seeming to be far from other things and taxis not obeying any sort of consistency about leaving on their lights, I think I developed a little more fondness for the city. Still, San Francisco reminded me of just how comfortably easy so much of Seattle can be, particularly when you live approximately in the middle of it.

Little jaunts are good for that, I guess. Tomorrow, early is Honolulu for a conference. Then next week, a meeting in DC. And I'm so tempted by the crazy November IcelandAir promotion for flights and accommodations for about $500. They say that it's a great time to see the aurora.