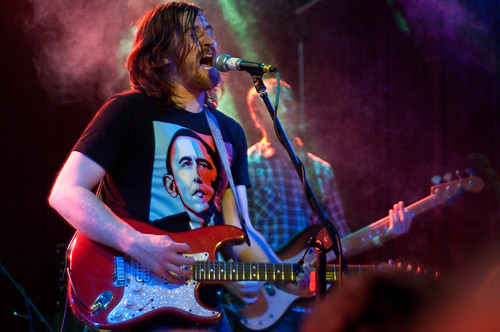 Last night we went to King Cobra and sat under the slowly undulating lights to drink Fat Tire out of cans and bask in the glow of a new administration. The bar played the ABC coverage of the Neighborhood Ball on the big screen but only cut to the live audio during Michelle and Barack's first dance to a Beyoncee serenade. The rest of the A-list performances had house rock played over them, inducing some surprising dissonances. But how about that dance, right?

This, after a morning waking up before dawn to get in a line to scurry for table, to plead for mimosas and end up eating cupcakes and being awestruck and winding up with a champagne hangover by four in the afternoon.

and then, even later, dashing across the street to catch Tapes 'n Tapes using their heavy metal voices. A guy pushed his way to the front and handed them campaign signs, but nothing really came of it. The show was a welcome break from talking about the future and the return of optimism. They played my favorite three songs, saving the hits for the end. But if there is a better line of devotion in spaghetti western indie rock than "I will be your badger", I'm not sure what it is. Actually, I worry that I've always misheard that line, but if so please how about just not telling me.