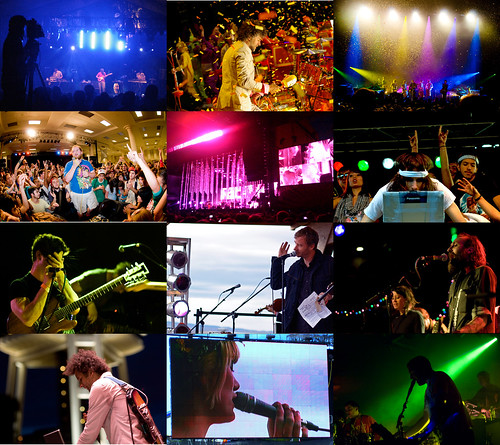 How about a list of shows from last year while we're at it?

Notes, from top left:
(1) at the end of a super-crowded, frustrating day, after being nearly crushed to death trying to see M.I.A., the flashing lights, loud noise, and Panda Bear cover was exactly what I needed. And then Prince played like a three hour variety show. (2) I was a teletubby along with a bunch of ecstacy-popping teens. (3) Sigur Ros in stripped-down rock form. A few people stood up and danced in Benaroya hall. Then it rained confetti. (4) this was an hour after Monotonix were shut down very early. Dan's show was even more crowded and more intense, yet he managed to turn the crowd into a team-building love fest. In the middle of a crushing dance-off, someone even picked up my fallen lens cap. (5) two nights of Radiohead in New Jersey with a backdrop of Manhattan. I liked night 2 -- "the hits" -- slightly better. (6) this picture is from Girl Talk at the Capitol Hill Block Party, where I fled to the side stage when the photopit was cleared, but his show at All Points West was more amazing for the toilet paper leaf blowers, beach toys, giant plastic bags, and mattress crowd surfing -- as prelude to a sprint to Radiohead. (7) was so blown away by Foals and their synchronized off-kilter gloom-dance-punk at SP20 that I went and saw them with Wolf Parade the next day at Neumo's (8) the National got stuck at the border and missed their afternoon set. Nightfall, with gathering clouds, was so much better for them. (9) Grand Archives at the Triple Door for their CD release show started with Mat Brooke and Jen Ghetto playing some Carissa's Weird songs and then went on to take advantage of lush instrumentation and the venue's impeccable sound design (10) Battles are robots from the future and we will happily surrender to them (11) how had I gone so long without having heard Shout Out Louds? they're like the more beautiful Smiths tumbling through a field of dandelions (12) if only for their live rendering of the backward vocals in "Wrestlers", the cover of "Nothing Compares 2 U", and everyone singing along to "Time After Time" as the exit music.

Finally, many of these aren't great photos which might mean that I end up enjoying shows more when I'm not taking pictures or that I just didn't get photo passes for big shows.
Subscribe