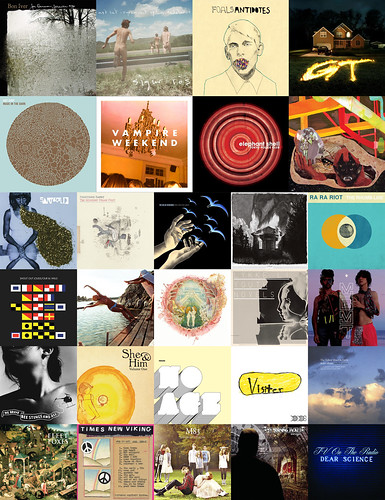 Bon Iver - For Emma, Forever Ago : SO EMO. I listened to the self-released version a little bit in 2007, but fell in love with the album on a train to Boston while reading Out Stealing Horses. I am not happy with myself for missing their Seattle shows (because of Vampire weekend first, then Bumbershoot later) before they got ridiculously famous.

Foals - Antidotes : I’d been meaning to listen to them forever, but kept missing their shows until they played SP20 at Marymoor Park this summer. I was entirely blown away and went back to see them the next night at Neumo’s. Trying to pick a song, though I can’t tell how much of my love for them is directly related to having seen them in person.

Sigur Ros - Með suð í eyrum við spilum endalaust : Every new Sigur Ros album turns out to be my favorite Sigur Ros album, but I really do love how technicolor and giddy the first half of this record sounds (clearly recorded before Iceland collapsed). Then it ends all weepy with the english-language confessional.

Girl Talk - Feed the Animals: I don’t care what you say, this is better than Night Ripper.

Hot Chip - Made in the Dark : Nerdcore dance rock, with a love song set in the context of professional wrestling that’s both funny and affecting (take that, Flight of the Conchords)! How did Bruce Springsteen get the theme song for the Wrestler when this was available?

Tokyo Police Club - Elephant Shell : Spazzy pop with screaming, tambourines, and seizure lights. I am kind of embarrassed about how much I like this, even though it’s Saddle Creekier than their early EPs.

Wolf Parade - At Mount Zoomer : Once I forgave this for not being Apologies to the Queen Mary it became a lot easier to like. Even with the jammy bits, it’s an entirely a solid piece of work.

:: "twenty more", in alphabetical order, because that makes for a nice-looking collage ::

the Dodos - “Red and Purple” [mp3] : from Visiter. One of those psychfolk records that was hard to take all at once, but still had some catchiness in small doses.

Frightened Rabbit - “Fast Blood” [mp3] : from Midnight Organ Fight. Sad sappy scots won me over a few tracks at a time. If only the songs didn't have a way of self-destructing at the end (esp. "My Backwards Walk").

Fleet Foxes - “He Doesn’t Know Why” [mp3] : (s/t). Seattle's biggest stars of the year succeeded in bringing flannel back and took overclean nature hymns mainstream. At their showy best in outdoor settings like the afternoon Sasquatch set or packing the block party front-to-back. I'd like to see them revisit their inside voices.

the Helio Sequence - “Hallelujah” [mp3] : from Keep Your Eyes Ahead

Islands - “Abominable Snow” [mp3]: from Arm's Way. This manages to squeeze pretty much every traditional element that you'd come to expect from an Islands into a single track. There's a whole lot of good stuff on the record and it seems like the band sounds and acts like a band now and not just a calypso model UN for Nick Diamonds to lead.

Lykke Li - “Let It Fall” [mp3]: from Youth Novels. Representing the Swedepop delegation, so singalongable that you have to be careful not to make a scene while walking.

M83 - “Kim & Jessie” [mp3] : from Saturdays = Youth. It's so weird that this isn't an eighties artifact recently unearthed from a loner French kid's timecapsule diary.

MGMT - “Kids” [mp3] : from Oracular Spectacular. Some of the most emblematic 2k8 dance stuff of the year in the midst of an album obsessed with the past.

Mount Eerie - “You Swan, Go On” [mp3] : from Lost Wisdom (with Julie Dorion & Fred Squire) Of course, anything that has Phil Elverum teaming up with Julie Dorion is bound to be melancholy, contemplative, and beautiful.

My Morning Jacket - “Touch Me I’m Going To Scream (Part 1)” [mp3] : from Evil Urges. I love them live, playing big stages in space boots with alien technologies, but I just couldn't get into the whole album. I think it's because whenever it got to "Highly Suspicious" came up in the rotation I just couldn't take it seriously.

No Age - “Teen Creeps” [mp3]: from Nouns. a whole lot of pretty/ugly/overload appeal.

Ra Ra Riot - “St. Peter’s Day Festival” [mp3] : from the Rhumb Line. Especially the little figure at 0:19 and the "come ons" scattered throughout. The reworking of "Can You Tell" from the EP causes uncomfortable confusion.

She & Him - “Why Do You Let Me Stay Here” [mp3] : from Volume One. She & Him is great (something like Rilo Kiley/Joanna Newsom + Neko Case/4 + √Polyphonic Spree). For too long, I incorrectly assumed that they were getting all that press because Zoe Dechanel is in it.

the Tallest Man On Earth - “The Gardner” [mp3] : from Shallow Graves. One of the prettier songs on this odd often uncomfortable record. So much so that it took me dozens of listens before I processed the macabre lyrics.

Thao with the Get Down Stay Down- “Bag Of Hammers” [mp3] : from We Brave Bee Stings and All. Not at all the sound you'd expect from the package.

Throw Me the Statue - “Conquering Kids” [mp3] : from Moonbeams.. This song is a mumblecore movie waiting to be made (esp. "awkward locker kids looking brave").

Times New Viking - “My Head” [mp3] : from</em> Rip It Off. This band broke my eardrums harder than I thought possible from three people on stage with barely any gear. So loud and intentionally shoddily produced.

TV on the Radio - “Halfway Home” [mp3] : from Dear Science,. Another TVOTR effort I tried and failed to love.

:: omissions, or these could have been in the last row if I hadn't tired of this ::