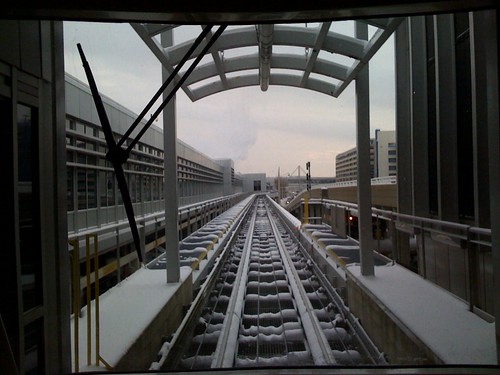 This is the tram at the Minneapolis-St. Paul aeromall this morning. I hate being such a whiny baby about travel inconveniences (hovering around ghostship airports isn't really so bad, it's the anxiety-uncertainty bits that are more bothersome). Still, my favorite cause of travel-related delays yesterday was once we were finally aboard the giant old 747, we just sat next to the gate for an hour before the pilot had to tell us that the truck used to clean the lavatories had run out of gas and was stuck directly under the plane. Eventually a new truck arrived with extra fuel or with the ability to extract the sewermobile, allowing us to depart.

So, it seems that after a couple days of phone calls and transit I made it to Michigan just in time for the Table 15 Solstice party. Though our numbers were fewer due to snowstorms and travel schedules, we did our best to continue on. The game required a little bit of telephone consultation, but I left the white elephant with an excellent Kenny Rogers album.

Of course, there is snow by the gobful here, too. They're just slightly better equipped to deal with it even if I'm not.