thao with the get down stay down 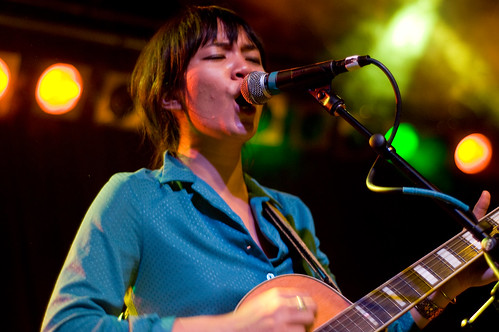 Last night, walking down to Neumo's for night two of the KEXP Yule Benefit, the sky opened up and the weather delivered on the threat of snow. Couples kissed under spotlights on streetcorners, people streamed from bars to take pictures of themselves with snowy backdrops. And I, a Michigan transplant with enough years here, fell somewhere between acknowledging that yes, it really was something, and dismissing it all with relief that it wouldn't stay around for more than a day or two.

Thao was certainly the highlight of the lineup; especially since I didn't get to see her whole set during Bumbershoot. Her songs were stuck in my head all through the next morning while penguin-walking down to brunch. We caught a bit of Cancer Rising (which Samantha classifed as "weed rap") and tried to skip a second serving of Shearwater by hanging out in the bar next door.

On the way home the wind had really picked up and our emergency hot dogs were cold by the time we found a taxi. Walking back to my apartment I thought, as I usually do in real snowstorms, about that winter in East Lansing at Toad Lane when it really snowed. I remember tromping from our little cottage across foot deep snowbanks through parking lots for some forgotten reason. Maybe to rent a movie if there even was a movie rental place on Grand River. Maybe it was the end of the semester because I remember it being very quiet and getting my car getting stuck the next morning. We were too thoughtless to have shovels; so we had to clear a path with brooms and rakes and Jenna had to keep shoving my car to keep it going. Even then, in a winter wonderland state we were unprepared for the consequences of the elements. That house was hilarious. We left the lights up even after the school paper made fun of us for it.