the thermals and other stuff from this week 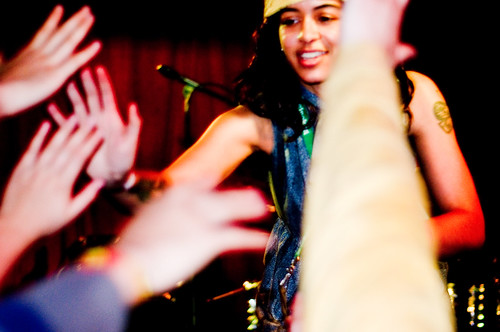 I saw the Thermals at Chop Suey on Thursday and they kept up their reputation as always being one of my favorite kinds of shows. Fun and sweaty and high energy. I stood in front near the speakers and took some pictures, sang along, and bounced around at the edge of a throbbing dance floor. The new songs sound enough like the old songs, but different enough that I'm already excited about hearing the new album next year. And the band has a theme song that I don't remember hearing before. (you can find a version of it online [daytrotter]

Other things from this week included seeing Doubt, a movie that obviously used to be a play. It was OK, but the transition to the screen was a bit bumpy because the things that work when you're watching a person onstage seem overdramatic when their face is twenty feet tall. We also saw Australia last night. It could have been more surreally Lurhman for my taste, but it was nowhere near as bad as I'd expected from some of the reviews.