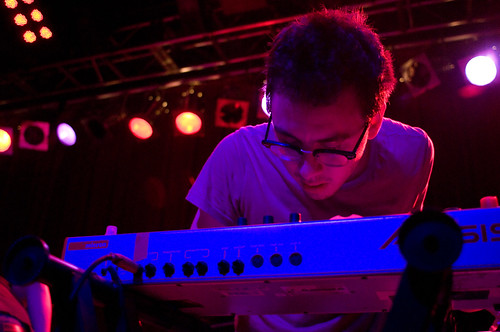 On Friday we went to the Buck, the latest of the Olive Way revival, to have drinks and play with plastic cowboys. It's a lot less cluttered and crowded than their other places, but is definitely part of the Bleu Bistro family. Later, the Redwood was packed smelling like a woodsy cabin on account of their heating system.

Saturday, I checked out part of the Bigfoot Conference, had coffee at Solstice (which I still miss from being in the U-District), and went to Neumo's to drink for the kids for the Vera Project. I'm surprised to find that my affection for Tokyo Police Club, the once secret headliners, hasn't waned. They're spazzy and ridiculously energetic and just a lot of fun even if they aren't aiming to change the world. After the show, and taking far too many pictures, we went to Quinn, which was blissfully uncrowded with delicious beer on tap. From our seats at the bar, we were entertained by watching all of the bands loading out of the club.

After brunch this afternoon, we walked around the block and saw Rachel Getting Married at the Egyptian, which was filled with the matinee crowd. It was, I think, very good. But also brutal and very much like actually experiencing a wedding weekend of confusing affiliations, non sequitur traditions with all of the jagged underlying family drama laid bare. That is, exactly the category of movie that I usually find at least one of to love every year. Afterwards, walking home on a suddenly perfect autumn afternoon, I was exhausted. And relieved that last weekend in Delaware included a hayride instead of a talent show. Then again, that event didn't include the lead singer of TV On The Radio; though it almost included Crosby and Nash.