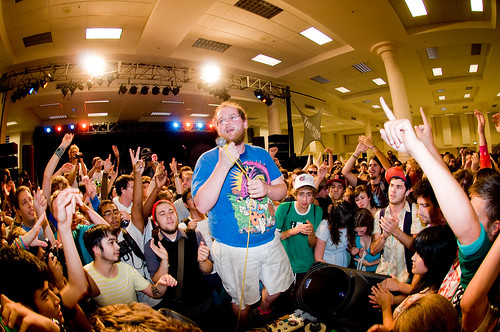 OK. Maybe it was being in the middle of a third exhausting day of Bumbershoot. Or maybe it was nearly being crushed to death while having my eardrums destroyed. Or possibly the sharp contrast between the vibe in comparison to Monotonix (which got shut down after 10 minutes). Or it could be my fondness for well-meaning cult figures and the cultists who love them who care about safety first.

In any case, there came a time today when I was nearly certain that Dan Deacon was the best thing ever and thought "really? My Aunt Whitney Festival Catharsis Moment (TM) is arriving via a maker of weird noises from Ohio?", but then just went with it and watched the kids making the amazing gauntlet of love.

Also, I am so very tired. And there are just a handful more pictures posted flickr-style. Many of them not using the borrowed fisheye lens.