a mountain on the way to seattle 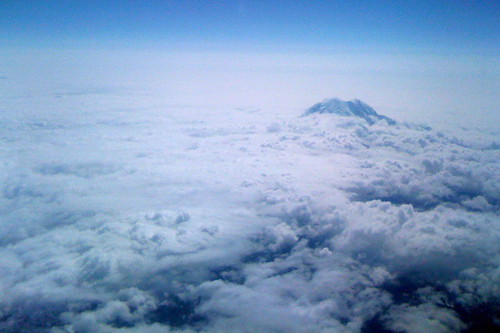 I have been flying a lot lately, but rather than becoming numbed I feel like I am instead becoming oversensitized to every minor inconvenience involved with air travel. Last week, a delayed and rescheduled flight sent me running for a coffee and an anti-inflammatory to stave off a headache and not having a charged laptop battery to watch the LOST season finale seemed catastrophic. By the end of the trip, though, the clouds looked like Antarctica and all of the sudden there was a mountain sticking through it all before the plane skimmed and dove through the surface of the clouds, which was kind of neat.

Yet with all of this functional traveling, I seem not to have accumulated enough mileage to offset the ridiculous fares involved with flying to Michigan next month to celebrate Independence Day.