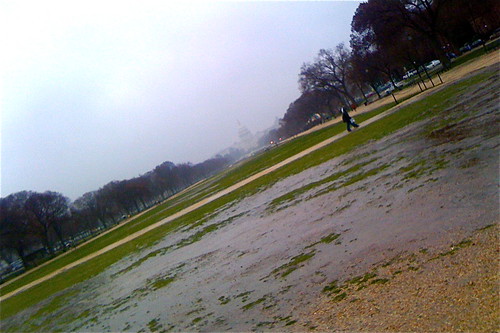 Washington DC was a rainy mess on Friday. I ventured out for the afternoon not thinking about the weather and ended up getting pretty wet and dodging hordes of kids who were in town for something called Presidential Classroom. Luckily I had time to change into something dry before flying back to Seattle.

For some reason I became obsessed with the newish Hot Chip album. It just sort of came up and then was the only thing I wanted to listen to while walking around the hotel and office park landscape of Crystal City (complete with its Metro station in a boring shopping center), navigating the subway, and wandering around museums. In particular "Wrestlers". It's a little Flight of the Conchordsish, but I still can't stop playing it. [hype]

On the way home, I finished reading Remainder [$]. it was disconcerting but interesting to read something that didn't feel like it was coming out of my head and about a protagonist that I didn't really like or understand all that well. By the end, though, it does a neat trick in that I went from being annoyed with his obsession, to horrified by his decisions, and then vaguely and suddenly getting a sense of his motivations.