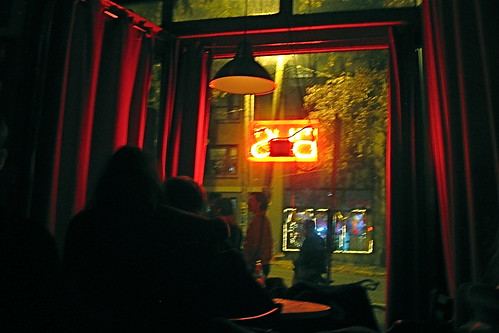 By the end of the long weekend, I confess to experiencing a little bit of cabin fever. During some of the days, I bought groceries, watched an embarrassing amount of syndicated television, acquired a portable oil-filled radiator (it heats up my spare room rather nicely -- a trick learned from Army of Shadows), put some pages from my eurotrip2007 notebook on the internet, and read the new Haruki Murakami novel over several cups of coffee.

One night we had a double-header game night at the Stumbling Monk, where they had some pretty delicious wintery beers on tap. Sunday night was the last night for Bus Stop before they closed their doors to make the block ready for the bulldozers to come and turn it into rubble. I can see how it's sad that ugly condos are coming to replace an ugly row of good bars and putting their owners out of business, but I don't think I'll be chaining myself to the doors to stop the wrecking ball. Things change. Anyway, it was fun and my karaoke allergies weren't even that bothersome.