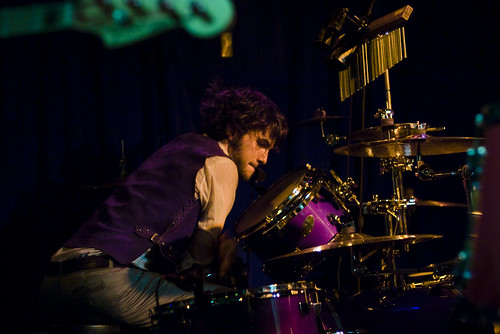 I went to sleep early on Friday night because a week later I was still feeling like a senior citizen confused by standard time, the short spans of daylight, and early sunsets. Or maybe I just wanted to watch Friday Night Lights before going out and lost my motivation. The same thing, really.

By Saturday, the retail core was already swarming with holiday shoppers when I ventured through downtown in the afternoon. By evening, kids were wrapped around the block waiting to get into the Showbox. We outsmarted them by having drinks at the Alibi room, selling spare tickets on the sidewalk, and somehow skipping the lines to get inside just in time to see Grand Archives. During the Helio Sequence's set, we retired to the area where many pairs of people were making out in front of the bar. Weekend crowd.

After a couple Minus the Bear songs, I hurried up to the Crocodile because I didn't want to miss Annuals, mostly because they're great live, but a little bit because of that article in the Oxford American.

And tonight I saw Blade Runner at the Cinerama. I think I saw it before, but I didn't remember just how intense and eighties emo it was.