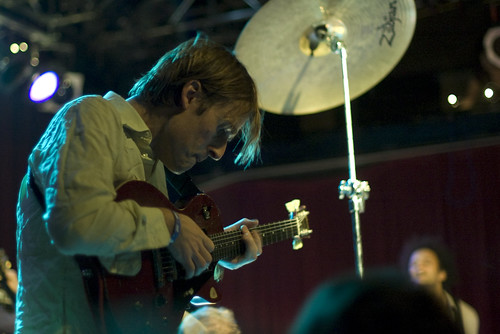 Pretty much everything about the Battles show at Neumo's was awesome except for: (1) some kid having a bad trip and security dragging his twitchy flailing body out from mosh pond and (2) the band having a cheerleader/booster dude that repeatedly climbed up on stage to let us know when we should clap as if we couldn't figure out when something was cool enough to merit applause. They were phenomenal and there was no shortage of music geeks gawking at their performance, so I don't think there was any danger of under appreciation. But, you know. Minor quibbles.

The set flew by and all of the sudden it was over and the line to buy t-shirts was too long. Instead we just went outside and I got a delicious falafel sandwich from that yellow truck just up the block which I ate while we grabbed a last drink at Quinn's, the new place from the owners of Zoë. They weren't using the extra hour for drinking, so we all went home "early".

Other weekend activities: installing software, checking out Tim's art at Solstice and regretting that I missed the opening because so much had already sold, being happy then sad to find the bad-good-stupid MSU-UM game on television, watching the rest of the final season of the Sopranos, a last outdoor brunch under propane lamps, seeing Wristcutters again now that it's finally in wide(r) release.

I was going to post an mp3 from this Bon Iver album, but it turns out that the whole thing is online. [virb]