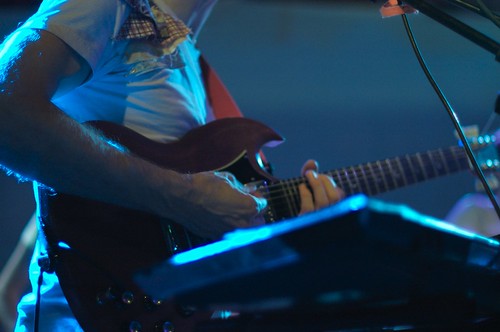 Last night around 7:45, I realized that I'd feel really stupid for not taking the opportunity to hear Joanna Newsom playing along with a symphony given that Seattle was one of the few stops on her orchestral tour; so I rushed down to Benaroya. It was pretty darn great, but maybe not as magnificently overwhelming as I'd expected. I think my favorite part was really being able to see all of her intricate string plucking since it was much easier to see the harp than through a crowd at the Showbox.

I got to Neumo's in the middle of Born Ruffians's set and was pleasantly surprised. Stereogum called the canadian band "spunk rock" which sounds kind of gross, but they were actually good. Then Caribou melted my face by being super loud and awesome and not at all what I thought they'd be like from the sound of their (his?) laptop-produced albums. The room was filled with a lot of enthusiastic head nodding and foot tapping, let me tell you.