liars and interpol were tops, wamu was weird. 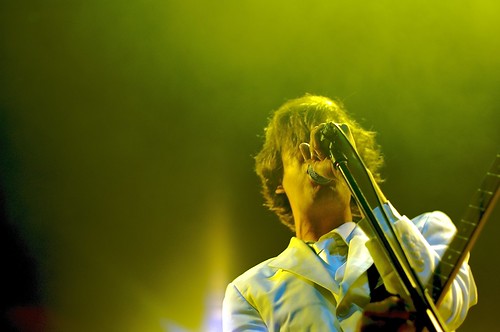 We saw Interpol and Liars last night at the WaMu Theater. Worrying that we'd be late, we went to Piecora for slices. For fifteen minutes, they forgot to prepare our order; so when they finally arrived we sat outside in the wind and burned our mouths eating from a cardboard box. It turns out that we made it to the show super early, but thanks to Ellen's choice of banking institution we were able to pass the time in the faux mid-century modernist "VIP" lounge (complete with overpriced wind and free bottle opener!) until the show started.

Inside, there were folding chairs set up all over the floor, which was odd. Rumor has it that they left them out to make the show seem more full. I thought that both bands were good, but I felt a little bit sorry for Liars since the crowd was thin for their show and few people were really there to see them. Either way, our promptnesssort of turned out well, like the awesome/weird wall at Sasquatch that allowed us to be close to the stage but (mostly) protected from being crushed by the crowd. Of course, once Interpol started the occasional person made it past the enthusiastic security to scream aggressively or squeeze in front of us, occasionally turning around because she just liked looking at me, thought I was great, and that maybe I should hold her tight instead of trying to avoid being pushed back into the wall of chairs.

After the show, we joined all of the crowd at the convenience store to buy bottles of water, then went up to Cafe Presse for wine, dessert, and Lillet.