we stood in a crowd and listened to josé gonzález last night. it was really pretty 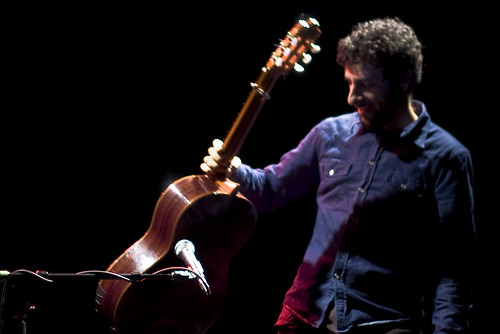 I ended my run of spending a few evenings staying home to indulge my persistent cold, watching television on the internet, finishing a book, and sleeping a lot, by getting caught in a downpour after reading the newspaper while drinking coffee on Sunday.

Then we went to a party at the Noodle Factory with a keg, a lot of good people, art, delicious cake and WhipDip. There were also dogs and children roaming the premises and it all looked oddly familiar, which was explained later when I saw someone who looked oddly familiar and it turns out that I had been to a party in the same building a few years ago where we sat in a circle and accused each other of being part of the Mafia (this was in the days before people called the game Werewolf, I think. Less PC?).

Eventually, hunger for real food took over and, denied entry to the closed Boat Street Cafe, we went to Zoe and ate delicious food at the bar before going to the Showbox to see José González. LIstening to his albums, you probably know that he's an exceptional guitar player, but seeing it from a few feet away makes it all the more obvious.

When the show was over and they'd turned on the "go away" lights, we retired to Smith to have a beer under the gaze of some taxidermized birds and other woodland creatures.