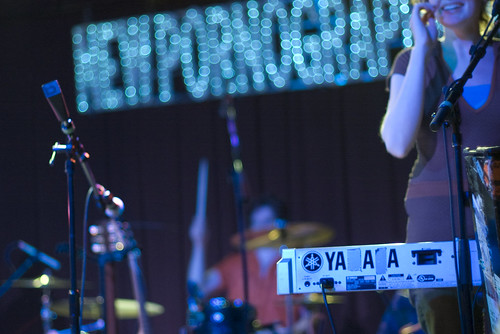 Last night might have been the first time that I saw the New Pornographers with all of the members on the same stage, supergroup style (although they did have to drag Dan back onstage against his will). Lots of music from Challengers (balanced by oldies like "Jackie" and "the Bleeding Heart Show") and occasional stunning four-part harmonies.The audience was pretty much jerkface-free until a drunk and sweaty dancing couple made their way down to the all ages floor and up to the stage one song into the hit parade encore.

Quote of the night, from Carl, regarding the Littlest Hobo and how America could have been improved if the show was carried by our networks: "if you don't like dogs helping people, there's something wrong with you."

P.S. Becky Stark may have the best smile in all of indie rock. By the end of Lavender Diamond's set, One Day Like Rain flashback moment aside, it seemed like they could induce world peace (or at least non-adversarial living).