Miranda July was at Bumbershoot last week. Today she was on the Bookworm podcast. 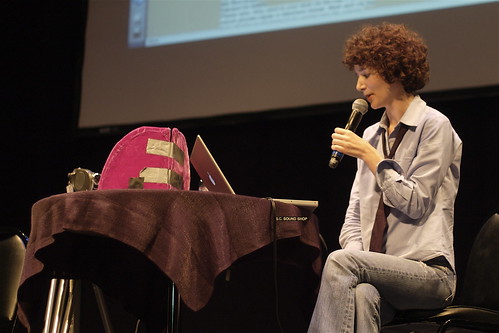 A couple of good quotes from Miranda July talking to Michael Silverblatt on Bookworm [kcrw] for those who prefer reading to listening (though you really should subscribe the the podcast). This one is about Learning to Love You More, the website that she and Harrell Fletcher run:

"... the idea of depression is just like weighing down on us ... and so much of depression (I think) is often really smart people being terrified that they're not going to be smart enough or that they're going to fail. It's not stupid lazy people lying around being depressed. I mean, it's like there's this kind of cliche of depression and there's this kind of modern definition of it. I think the assignments are in a way like `o.k. forget originality for a second. Just for two seconds, forget being the best and blowing us all away. Just feel something.' That's simply all the website asks." [kcrw]

And this, on her writing style, was in response to Silverblatt's characterization of it as metaphorical:

"I always think of it as ... like that I'm actually a very realistic scientific writer and I'm just trying to scientifically very accurately create the feeling ... I can only do that by veering off like you can only see the sun ... by looking to the side ... I'm never even thinking it's a metaphor. I'm totally believing. You know, I'm feeling it in my body. " [kcrw]