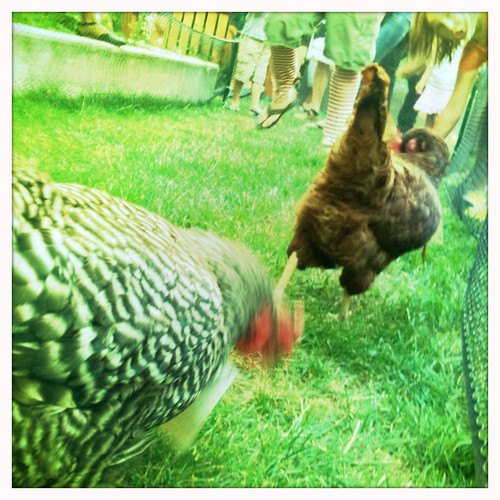 Of all the conveniently imported holidays from foreign lands, I think that Bastille Day is my favorite. Or at least it is my favorite as celebrated by the Adventure School in Seattle. For the second year in a row we ventured to Georgetown where they had turned a small trackside property situated under a flight path in the shadow of an overpass into a tres charming village estate. We arrived in time for the chicken races to witness a bit of ego-stroking parental cheating and stayed long enough until the kids had abandoned the modern art bouncehouse and the racing fowl had gone to roost. I wore hastily acquired American Apparel stripes and a beret while sipping rose, eating falafel and crepes, and helping someone celebrate an end of the night birthday. Probably partially because it marked the long-delayed summer, it felt like fantastically materialized perfection. I want(ed) to pack up and move to the countryside. Preferably into something more Summer Hours than A Christmas Tale.

Oh, and after a lot of wine I was convinced to eat an oyster! It was weird and I chewed it too much. But kind of like the ocean!

This summer of which we speak has been fickle, though. On some of the days that it's made an appearance I've read in the park or walked around downtown. There have been outdoor drinks at the hilarious Hard Rock Cafe before the outstanding and kind of unbelievable Carissa's Wierd & Aveo reunions. Sidewalk beer from Black Bottle as preparation for sitting in the cozy bar/theater for Inception. A hasty sendoff picnic at Madison Beach, which is not really a beach, but it's not such a bad little tourist town. That sort of thing.

Last weekend was the Capitol Hill Block Party. I'm still undecided about whether the annoyances outweigh the benefits. I guess that they do since I keep going back, but my problem-solvy mind can't help but spin against all of the obvious inefficiencies, apparent oversights, planning problems, and stymying site design. Maybe if I were going simply to drink and hang out in a beer garden or rooftop while music played in the background it would be entirely lovely. But having to cross the urban grid to get from stage to stage (and back again) while toting heavy camera gear made all of the quirks into glaring thorns. Don't call the orchestra of tiny violins, though: for three songs at a time I was among the few people with the best (mostly) unobstructed views of a whole lot of bands that I really like. Hassles aside, it's not such a bad way to spend a weekend. A bunch of the kids crushed into the barricade would've probably very happily traded places without any convincing.

I thought that the block partying, photo editing, and sun exposure (lather/rinse/repeat) would have left me too exhausted for a Monday night show, but I'm very glad that Two Weeks Ago Me made a bet on the future and bought Last Night Me a ticket for Wolf Parade. Not having to "work" the show let me hang out in the bar with friends during the first half of their set until I couldn't resist the increasingly bouncy main floor. Jumping around under a speaker in a sea of broments through the exhilirating encore left me a sweaty satisfied mess.