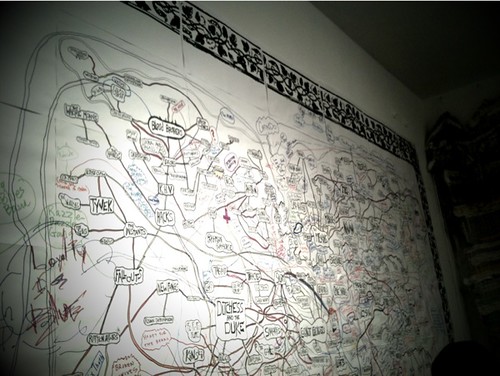 Approximately a hundred us-years ago, we went to play apocalyptic mini golf at a place called Smash Putt. It was a mechanical arty installation in an abandoned garage warehouse on the lower realms of the part of twelfth avenue that still clings to Capitol Hill. Inside, there was a bar and nine holes of golf. It was extremely loud and crowded and terriffically fun. The holes involved jets of air, ferris wheels, closing holes, foosball obstacles, perilous Indiana Jones-like crossings, power saws, an air gun (goggles required), a catapult, spinning fans, a honking motor scooter, and, at the end, a drill that pierced your golf ball. When we arrived, despite having tickets, we were told that getting a tee time would be impossible. Undaunted by the screaming angry man in the doorway who had tired of waiting (without a "reservation"), we decided to at least take a look and get a drink. Miraculously, while sitting happily at a booth we lucked into a spot on the course and galavanted madly from green to green, delighting in the ingenuity and most definitely not keeping score.

Even though we were there for several hours and only a couple of adult beverages, I left feeling massively and happily off the rails. We continued the madness by dropping in at Pony, where I'm sure that we played a spirited game of air hockey with plenty of cheating.

The next day, was this tiny music festival called Expo 86. It took place in a cramped art gallery and a cluttered junk store. After some time at a steamy Summit Pub, we dashed across the rainy street to look at a hand drawn map of the incestuousness of Seattle's music community. A bit later, armed with a large can of cheap beer (that fell into a puddle, making it all the more authentic and sad), we returned and found a spot on the small rug in the back room to listen to Mount Eerie play songs about geese, wind, mountains, and the usual nature magic that I continue to find so compellingly endearing. Next door, at the Anne Bonny, John Atkins (of 764-HERO) sat in a chair in the middle of the room and we all crowded around him in the spaces between the folding chairs and vintage artifacts. Every time someone needed to enter or exit, the whole room had to slightly reconfigure, but this never really upset the quiet concert.

Finally, in anticipation of a trip to Canada, we took some time after brunch to venture "into the city" to have a look at hats. H & M proved a useful outlet, where I was able to secure a Siberian-appropriate faux fur head-warmer and a wolf-faced sweater. We celebrated our finds with a feel-good movie about a rock and roll radio station on a boat defying the will of British bureacrats (Pirate Radio) and walked back up the hill for a cozy dinner at Oddfellows that was marred slightly by the unexpected presence of dairy in a dish and some subsequent questions about the check and negotiation strategies. However, bolstered by the warmth of my new hat, I still picked up an ice cream cone for my walk home. 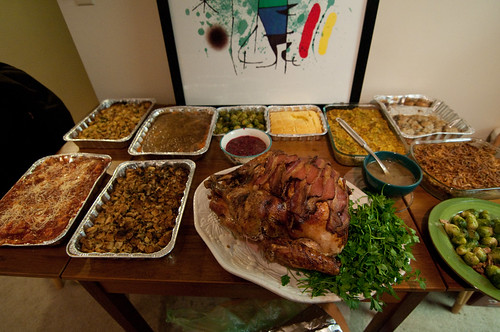 The long Thanksgiving weekend started with a traditional party in Fremont, with wine and cheese and desserts and kittens. It continued the next day with cooking at home, brief looks at the dog show, and an afternoon taxi ride over to Sedea's house where dance movies and cases of champagne were in full effect. Everyone took turns in the kitchen and there was far too much food and frequent demands that leftovers be taken home. There were epistemological discussions about the appropriate capitalization of the "s" in "Streets" w/r/t to where the dancers were taking it at the end of the movie. I missed most of Up due to some cooking responsibilities. Asa showed up just in time to carve the giant beast of a turkey that Joe had cooked and covered with bacon. There were tons of music videos OnDemand. We named the turkey by drawing names on napkins from a bowl. I was legitimately pleased with how my Tofurkey turned out; it may have transitioned from a one-time joke to an annual tradition. The pumpkin clove ice cream pie from Molly Moon's did not disappoint. After about six hours of festivities and bearing days worth of leftover food, I walked home on wet sidewalks and back alleys. A few hours later, there was a reconvening at a bar. I walked over mainly for the fresh air and the light exercise, returning home soon after when the party transitioned to dancing, an activity hardly advisable given the day's massive food consumption and incomplete digestion.

Rather than hunt for big box bargains, Carinna and I took a field trip to Ballard on Black Friday to look for boots and to hear a free show at Sonic Boom. The XX had caused a massive neighborhood shift, with much of Capitol Hill showing up in Ballard to crowd into a record store while a shy trio stood on a stage playing sexy music and either making a joke or a mistake about their location.

When the show was over, we hurried downtown to see the Fantastic Mr. Fox. Taking up half of a row, I think that we laughed harder than the rest of the theater combined. It was a pure delight, whimsical, weird, and hilarious in tiny and wonderful ways. I don't know that I've liked anything more all year. It was an early show, so we had plenty of time for adventuring. We started with pizzas at the Alibi room, walked downtown to the Polar Bar (ideal), and then returned to Capitol Hill for drinks around the big Tin Table with happy hour cocktails and ultra-salty fries. When my dream of making BOOM Noodle our new hangout fell through, we instead went to Oddfellows where some Fox-inspired hard apple cider induced some sort of allergic reaction on the order of sneezes and watery eyes. I went home and Benadrylled the night away.

I eventually left the house the next day to celebrate Carinna's birthday. It began with a cozy dinner at Cafe Presse, proceeded to a party at the Hideout, and ended at a talcum-covered Chop Suey with Emerald City Soul Club.

The weekend ended (relatively) quietly with the usual brunching, some drinks with bloggers at Bimbo's, dinner at the Sitting Room, and watching Bad Lieutenant, a pretty bizarre new Werner Herzog movie (which, I guess offset my usual Nicholas Cage aversion). I'm still not really sure what I think about it or the iguanas.

And now, this weekend. I guess it started on Thursday when everyone converged upon Havana for some sort of party where there wasn't too large of a crowd. After a while, Scottie and I went over to Moe Bar because Michael Cera was supposed to show up for his movie's afterparty with the Cobrasnake. We at first assumed that we'd missed whatever was happening, since the distribution of sunglasses and fake mustaches seemed to have stopped and the overcrowdedness dissipated after a few minutes. However, some faulty intelligence, inspired us to stick around, crowded into a booth and on the lookout. Eventually, we gave up. I went back across the street only to find that our friends had migrated up the hill to Pony, where there was a whole lot of fog and lasers. We managed to get in a drink or two, some epic pictures, and a rousing game of air hockey before the lights came on and we were all sent out into the cold.

Somehow, I didn't do anything on Friday.

Last night we fortified ourselves with Thai dinner and walked down to Re-Bar to see a friend performing in a drag show / underwear product placement event called Bacon Strip. True to its name and tone, bacon was served throughout the evening by a guy in a dreidl costume who was also toting a bottle of Manichevitz (that he didn't seem as into sharing). Parts of it were funny and enteratianing, but the makeup and costumes are kind of a degree or three away from clowns, which everyone knows are horrifying. I also made the terrible mistake of going to get a beer at the bar during one of the acts. The lines for bartender attention were so long that I ended up unknowingly missing the act that we came to see. By the finale, we had kind of maxed out; so instead of staying for the danceparty we paid a quick visit to the photobooth and then raced (really) up the hill to the Living Room and its fake fireplace upstairs lounge.

Today during the long long wait for a brunch table, we made the incredibly overdue discovery that waiting is a lot more palatable if you just order a beverage from the bar to help pass the time. Honestly, I'm not sure why it took me this long to figure this out. When our leisurely meal was completed we walked downtown, looked around at a few stores (a new backup fur lined hat, half-price!), and took in a second (for most of us) viewing of the Fantastic Mr. Fox. I still died with laughter and tears at many many parts. It's just so meticulous and funny and whimsical and a little sad and generally burbling over with big emotion and, to me, pretty much perfect all around. It's strange that it's gotten near-universal acclaim, but nowhere near as much buzz as it seserves.
Collapse