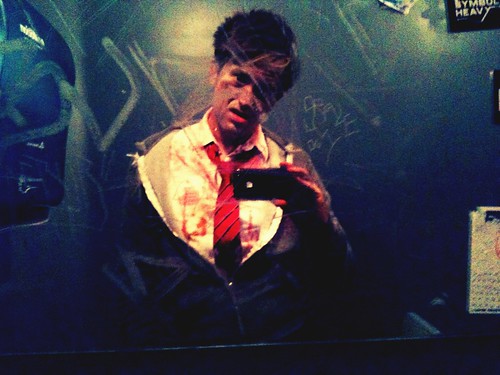 At the Rendezvous with my shirt in the sink, I may have, at first glance, appeared to be trying to salvage a shirt from a stain. Relatively quickly, though, it would be come apparent that I was trying to cover it in blood as unobtrusively as possible while periodically making room for others to engage in appropriate restroom hygiene. Having arrived late to the pre-party costume session, I entered my friend's birthday party in a shredded paint-spattered plaid shirt, some borrowed pajama pants, and wearing hastily applied face-whitening makeup and fake blood. In the red light of the grotto, this read more "homeless" than "zombie", prompting the change to the back-up costume and upping the ante on dripped blood. Though in comparison to most of the other attendees, this didn't constitute taking it to the max, it was a definite improvement. For future reference, light colored clothing is the way to go for your zombie needs.
( Collapse )
Collapse