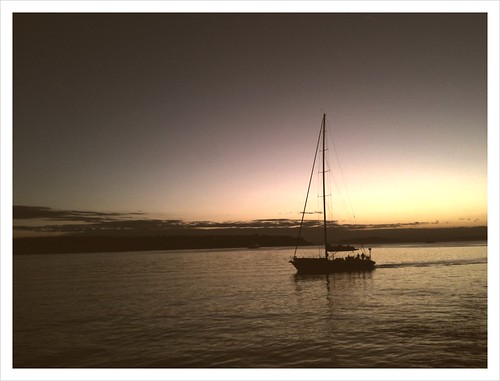 I'm not sure I really "understand" the "LJ REVIVAL (OMGFTW)", but hey. Here's a picture of a boat taken from another boat tonight around sunset. I really wanted to go on a water taxi ride before the season was over since the water taxi is one of the magical things about Seattle. And also because there were some rock photo shows in mystical West Seattle. So, we got on the boat and met another friend at the dock and went into town for dinner at Mission. The show at the cupcake place was closed early (BOO. CUPCAKE BOYCOTT) but we did arrive at the show at the bar in time to see our other pal win a wet t-shirt contest by taking off his pants. Everyone was at the Skylark and after a while the crowd was overwhelming so I went home and watched reality competition and typed this.

Last night, we saw Where the Wild Things Are at a preview screening to benefit 836 Seattle. Dave Eggers and Max Record were there to talk about goofy on-set injuries and we all got shiny paper crowns to wear. I loved the movie a whole lot (more today than even last night) The trailer, which I think I like the best of all, gives you the idea that it's going to be hours of having your heart explode. But instead, the film is muted yet visually beautiful and almost slyly understated despite the enormity of the visual effects. Max is insanely adorable, Karen O’s soundtrack is perfectly affecting, and the astoundingly good wild things are dreamlike and realistic. And like the book, and childhood, and maybe life, there isn't a huge amount of imposed plot or structure. There are, however, adventures, feelings, howling, sleeping in real piles, and a wild rumpus or two.