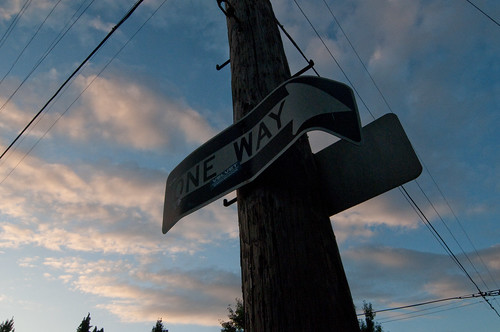 Last weekend Carinna and I went to Portland (a.k.a., the new Ballard), where the city had turned over some of its finest clubs to host Musicfest Northwest, a sort of (I imagine) South by Southwesty citywide parade of excellent shows. There, we were tormented both by wristbands and difficult decisions about how to best make use of them while balancing strategic decisions about lining up early versus seeking out taco stands and worlds of books. To an infrequent visitor, this collection of packed nighttime performances and small daytime performances in basements or former funeral homes only enhanced the perception that Portland is a sprawly city with a bit of magic in the air. Schoolbuses with confused drivers shuttled between clubs, a costumed wrestling match took place on our hotel’s covered courtyard, the per capita concentration of plaid and heavyframed glasses were so far above the national average it’s hardly even worth trying to quantify, entire villages of food carts have come to occupy stray parking lots, and sometimes people say “the evil swoosh” out loud.

Of course, the shows were great, too. Explosions in the Sky make melancholy sound heroic like nobody’s business; Frightened Rabbit make continual heartbreak seem like not such a poor life choice; Arctic Monkeys kept the dance floor rolling while seeming incredibly tired of being young and famous; Mount Eerie are wrapping sprightly nature poems in harsh metals; the Local Natives provided an excellent reason to get out of bed before ten; Pink Mountaintops were pleasantly less psychadelic than advertised; and the Get Up Kids had me screaming with Napster-era nostalgia during certain parts of their set. Also notable was a KEXP–Caffe Vita co-production at the Woods, a venue carved out of a former funeral home. The Lonely Forest, Langhorne Slim, Fences, John Vanderslice, Bobby Bare Jr., Black Whales, and others played tiny sets in the parlor as the perfect soundtrack taking it easy on a Saturday afternoon. All in all, the festival was a wonderful reason to visit our neighbor to the south to be reminded that there are cities even more relaxed than Seattle.

We returned on Sunday and had some parktime with friends and vegan meatloaf at the Redwood. The next day it was off to the Showbox to get covered in layers of sweat during a Girl Talk show and rehydrate with beer and pizza at Via Trib's late night happy hour. What I find meta-entertaining about his shows are the people who show up on stage. In California, it was Paris Hilton; in New York, it's professional famous drag queens; in Seattle, it's a mixed bag of party kids, programmer types, and collegiate hoodies and flannel.

Summer's making a last stand in Seattle; last night was ice cream in the park and burgers on the Linda's patio. Unfortunately, something in the air (or, more likely, a virus in my lungs) is causing the typical autumnal respiratory distress. Still, I hope to rally for tomorrow's Grand Archives/Most Serene Republic show.
Collapse