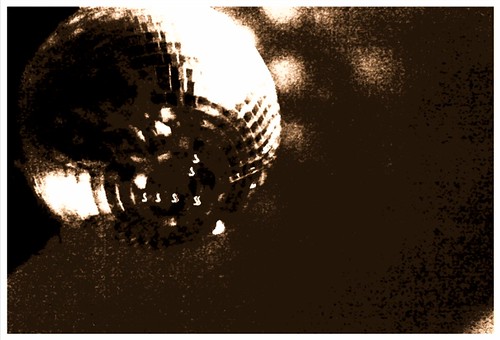 The chronicle of weekending continues here. I was walking home from work on Friday and Foursquare told me that there were friends in the park (of which I'm currently mayor); so I tried to find them, but they had already decamped for Presse. We found each other on the sidewalk and got a table and some lightly sparkling wine (and eggs, and falafel). Then half of the party was called into cheering-up duty; so we split for MOE where there were other friendly foursquarers at the bar. The group grew, reconfigured, relocated, et c. I kept saying that I was going to stay out for just another hour until eventually we had made a stop at Bimbo's (NOT the Cha Cha) and were on our way to the newly-revived Pony. Outside, we found a line and firefighters extinguishing the the shiny ancient beast of a convertible that gave up mid hill and set itself ablaze. Inside, we found even more friends, acquaintences, a strobe lighted bathroom (terrible), air hockey, and an architecturally-interesting deck. Then, with little else to do after closing time we went to play a sleepy round of Apples to Apples. Weird, right?

The next day, I think there was brunchish at Presse, new creamsicle [!] ice cream, a hilarious Eastlake BBQ (misunderstandings of eBay item titles, premises for independent films), and a trip to Soul Night [lineout] at the Lo Fi / Holy Mountain. It was the first time I'd been there (5 points!). Of course, it was fun. The most awkward and exhausting part was how I didn't realize that they stayed open past two; so I found it very emotionally taxing thinking that the end was in sight when it really, as far as I can tell, just stretches on and on forever. Eventually, though, we realized that what was most needed was pancakes; so we went to IHOP and live-tweeted the experience [#comehungryleavehappy] of being hungry, told what to order, and waiting forever for food.

On Sunday there was obviously brunch. While the others scattered to watch football or play High School Musical dating games, I took a break to watch tennis. Then we reconvened for another BBQ (cling to summer!), tried to kill Kanye on twitter, had some more hilarious indoor times, and then went to the Twilight Exit where mayoral battles were fought and karaoke was performed.

Because of some weird upstairs droning, I slept in my "spare bedroom". Because it is as a chamber of darkness, I slept like a coma.

Oh, and last night there was a going away thing at Sun Liquor and tonight is the Pains of Being Pure at Heart at Neumo's.
Collapse