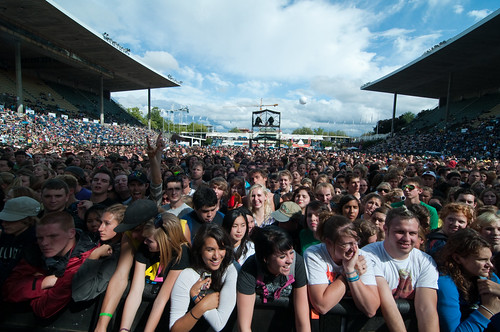 The Labor Day weekend was spent dreading and mostly avoiding the rain, which at least had the courtesy of showing up in the morning and having its say by early afternoon. This was helpful, because really the weekend was consumed with Bumbershoot, specifically carrying around loads of camera gear and taking pictures of bands for the internet [stereogum]. This was fun for a number of reasons -- from a technical perspective, the joy of natural light, real spotlights, and fancy walls of video instead of infuriating club LEDs is not insubstantial, even if it means dodging the occasional raindrop. There's also the matter of getting to see little bits of a whole lot of bands -- some of them really weird and commercial that I'd probably never even consider seeing -- in a relatively short timeframe (Natalie Portman's Shaved Head, All American Rejects, Os Mutantes, Low vs. Diamond, Akimbo, Elvis Perkins in Dearland, Matt & Kim, the Whore Moans, Gang Gang Dance, Uh Huh Her, Telekinesis, Sheryl Crow, Kay Kay and his Weathered Underground, the Yeah Yeah Yeahs, Holy Fuck ×3, U.S.E., Romance, Vivian Girls, No Age, MSTRKRFT, Jason Mraz, DJ Spooky, Akron/Family, Black Eyed Peas, Dead Confederate, Wallpaper, the Cave Singers, the Portland Cello Project, Audrye Sessions, Modest Mouse, Metric), plus the writers of LOST chatting with an EW obsessive, and some phenomenal art curated by awesome friends.

With all of it, the little thrill of the urgency of rushing from stage to stage, using your fancy stickers to skip lines, and getting to be in the front row for a few songs to see the bands and/or their theme park productions up close and look back at the true fans going nuts to see their favorites after actually enduring the weather, dancing in their neon sunglasses, being crowdsurfed either for sport or to escape to the throngs. Along the way finding cool posters to add to the stack/rotation, subsisting on available comped food and energy beverages, seeing the press fleet taping themselves up like racehorses, and not needing ending up needing to use the silly camera plastic rainsleeves after all. And, finally, staying up all night turning a couple thousand images into a hundred and fifty.

So, you know, fun and tiring times. The usual cycle of overstimulation and reactionary introversion. But next week, an adventure to Portland for a laid-back in-city type festival and maybe next month a weekend in San Francisco for more bands on stages on an island [treasureisland], because, hey! flights are cheap and maybe there are couches to be found so why not?
Collapse