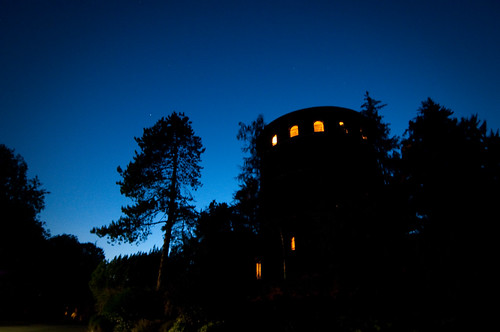 In which I reconstruct the last couple weeks through my foursquare history:

a long time ago we went to Whidbey Island for wedding festivities. Pizza parties at a spiritual retreat, brunch in cutiepants downtown, a ceremony in a lush garden, reception in a converted barn, bagels and bocce in a park. It gets very seriously dark away from the world and you can close out a bar after a wedding reception and still be at your weird hotel before midnight.

the next day was my birthday happening, mainly at Bathtub Gin, which is an ideal modestly hidden not as small as it initially appears little bar. Lots of people buying good drinks, fake tattoo sleves, and a pocket dolphin. Eventually, we left for Del Rey where being a good sport about disgusting drinks leads to a hazy conversations with deadbeat French pilots, an inexplicable peach from a loud music cab driver, and a pretty seriously unpleasant next day.

later in the week, an event at a hotel where area bartenders mix instant coffee into creative cocktails for pride and charity. Afterwards, stumble through a major gathering spectacle for "Lullaby Moon". Kids in clock faces, bunches of balloons, adults in horse or cat heads pushing carriages. Owls with glowing eyes. Top hatted ceremony masters. All convening around the art museum.

then, the last of the mural concert series at Seattle Center spent between blankets and beer gardens, with the Fruit Bats, Johnny & the Moon, and the Moondoggies. A quick cab to Cal Anderson for 9 to 5 with Rancho Bravo and Molly Moon. Though I'd seen the movie before I remembered only parts of it, often incorrectly. Then, an acquaintance trying to launch a glutenveganfree cupcake business, a foursquare scavenger hunt to find friends leading eventually to a series of bars on fifteenth.

matinee District 9, some post-alien ruminating and recovery, followed of course by a convergence at Linda's around a not big enough table, and then a nonstalgia stop ath the cha cha, mainly as a reaction to the faux nostalgia corporate block party that we all avoided.

a bunch of reading resulted in missing lawn games, by the time I ventured out of the cafe and toward Volunteer Park, night was falling quickly and my sense of geography was contorted. through text messages and voicemails and dodges through back streets I managed to find the croqueteers at Smith. One part of the party was sending off a British Islander another was getting ready to receive a couchsurfing German.

let's see, there was also the matter of the excellent happy hour at the Saint and then a couple rounds of saving the world from infectious disease through the cooperative board game of Pandemic at the too-dark Stumbling Monk.

At some point, there was a trek to the newish Twilight Exit to send a pack of friends off to Vegas.

And then this weekend included dinner at candle-overloaded Barrio, proof of the superiority of ice cream over frozen custard, watching Inglourious Basterds , meeting friends at a bar before closing time, and then wandering around the neighborhood in a successful search for latenight rooftop drinking. Later, we realized that no one on the roof actually seemed to live in the building.

And yesterday, the Brunch of Dreams Come True on the Linda's patio, topped with lemonade sorbet, a show in the park (exhoxos), and concluding with the deck at Captain Blacks. No sunburn.

Also quite a bit of reading Infinite Jest, mostly at Vivace along with my newfound warm-weather appreciation for iced americanos, especially with lemon zest.
Collapse