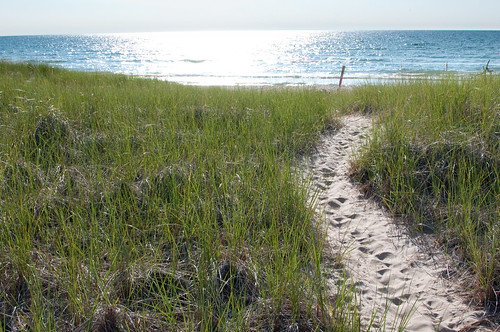 At some point in the last week of June I made a delayed/impulsive decision to buy some airplane tickets to keep up a tradition of spending the Independence Day with family in Michigan. Earlier in the year, there had been some serious talk of postponing to better align other further-flung schedules, but that didn't entirely pan out. So I hopped on an overnight flight on the third and woke up on the fourth in the midwest ready for firework fun times on Lake Michigan. I stayed for four nights, which turned out to be a pretty ideal length of time for the required small town art fair, a single fireworks display, grilling, wandering through once-quaint main streets, boating, and sitting on patios overlooking sunsets. Among the great failures, though, was the absence of ice cream due mainly to a serious bout of carsickness that made the thought of a blended dairy dessert severely less than appealing.

I made it back to town mid-week and spent a few days asocially but pretty seriously chipping away at neglected work and diving back into and catching up on the Infinite Summer read with the morbidly-purchased first edition hardcover (instead of the well-worn paperback). Somewhere around Saturday afternoon I hit the part of the novel where the text starts to almost glow and sing (for me, at least moreso than the preceeding pages, right around page 144 with the thing about the failure of videophony). For the degree of mental space this book consumes for me and the frequency that little parts of it have been permanently entrenched in my brain since I first slogged through it so many summers ago, it's kind of bizarre that it's taken me this long to re-read the whole thing.
Collapse