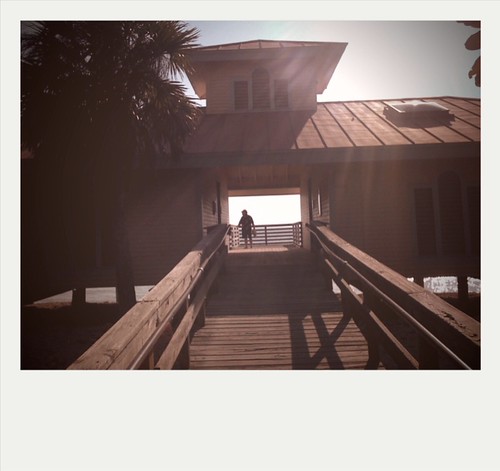 My left eyelid has been twitchy for over a week. At first I thought it was that I was allergic to whatever the trees were doing to get ready for spring, and later someone told me that it could be symptomatic of a potassium deficiency so I drank a couple "smoothies" from my office's Starbucks. They are reasonably delicious.

I've also been feeling chronologically disentangled lately, which I blame on being in the midst of planning a series of trips, which creates distortions in my personal internal calendaring abilities. These facts might not be related.

In any case, I've just returned from a conference in a nowhereland somewhere north of Tampa, where I got lost at every opportunity due to repetitive geography and cosmetically curving roads with poor signage. I flew in very late and rented a car and drove around the grounds of the golf resort until they could locate an unoccupied room. The facilities seemed to have been built a few decades ago for elderly golf enthusiasts to spend their last days, leaving their small residences smelling vaguely of nursing homes to be rented to hotel guests for eternity. On Saturday afternoon I eventually overcame my severe disorientation to drive to a state park and walk on a rocky, shelly beach for a couple of warm barefoot hours. With the wind at your back, the smell of fish was hardly evident. Oh, and there were people getting married on the beach and some of them were wearing swords along with their corporate casual apparel.

It was a pretty grown-up bit of travel though, with a rental car, shiny new suitcase, several room service breakfasts, and very lucky airline upgrades that made the unexciting affair much more pleasant. The major advantages of the event were the opportunities to meet people whose voices I've heard on conference calls and to experience a few days of sincerely nice weather.

When I got home, it was raining. I met friends at a small new bar close to my office called the Knee High. It used to be a pizzeria that I never tried. Now it is a cute little place with an array of fancy/old timey/sour cocktails and the significant bonus of having a hot pretzel with rarebit on the menu. After a while, I zipped to Norm's in Fremont for a birthday party that slowly became compressed as hordes dressed in St. Patrick's day apparel overtook the entire bar.

I hadn't realized that this was a holiday that merited being stretched out into five day affair, yet there were even few plastic green hats at brunch today, too. Later, after the snow and rain and wind, I went to the International District to check out a new gallery/bar/membership place that's taken over the space formerly occupied by the Wing Luke museum. It's kind of neat, but also kind of big like a residence hall's community lounge with couches and friendly networking conversations to match.
Collapse