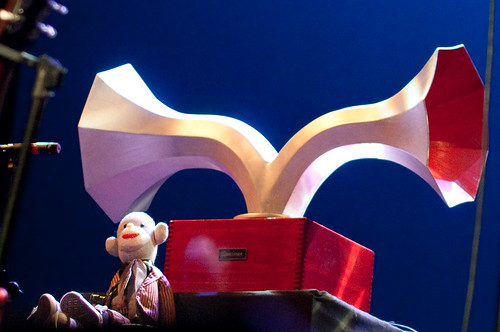 In the last week of livejournal silence, Andrew Bird at the Moore on Monday. We thought we were geniuses by showing up early to pick up tickets (to figure out the [lack of] plus-one situation) so we'd have time for drinks, but the guest list kept getting delayed so we stood outside and cycled through the line a few times with no drinks and just enough time to get inside to hear Loney Dear. But, um, why am I complaining? Both band were great and my ticket was for one of the boxes where you get to perch on the ledge to see the show. I've been listening to Noble Beast like crazy. Right now, I'm obsessed with the part in "Tenuousness" where he sings "click, click, click" about two minutes in. I don't know why, the third quiet one just gets me every time. When the show was over we went to Le Pichet for wine and baked eggs. 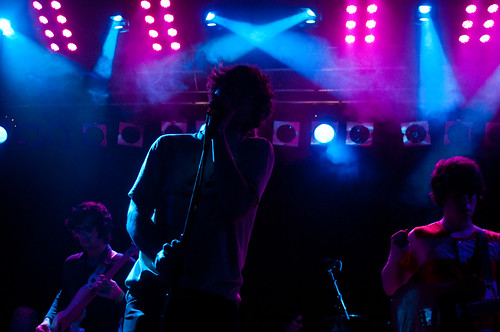 Tuesday night I crashed a mixer and we migrated to Grey and turned into a gathering. For some reason, there was salad with my hazelnut crepe. Who am I to turn down a pile of lettuce. The next night was Telekinesis, Cut Off Your Hands (both were new to me and differently delightful, the first for pop hooks, the second for dark snarly kiwi exuberance) and Ra Ra Riot (whom I always adore: electric cello & violin? singer giving drummer backrubs mid-set? upbeat songs like freight trains being sung for their lives? yes.).

And then a day of making materials for a forum at city hall about the news, and "live twittering" and sending video onto the internet along the way, and ending up for drinks at Polar Bar, which is really just a bar in a lobby. But it's in the lobby of a hotel in a building with walruses surrounding the exterior (they aren't exactly grotesques, but I can't think of -- or don't know -- the right word) and is highly reminiscent of the bar in the Shining. I kind of love it.

After all of this I was burned out so I stayed home on Friday and tried to see the Class on Saturday. That just turned into going to wine bars due to mistiming. After brunch on Sunday I crashed into allergies and started making my way through the first season of Friday Night Lights, my latest doomed television obsesson. This year is really good, but the early episodes are even better. It's amazing how much of the series is right there in the pilot waiting to unfold.
Collapse