Growing a new hand is hard. Or rather, I'd imagine it would be from the lengthy recovery process of my random post-party sidewalk-midjudging trip-and-fall palm gouging a week and a half ago. The fake plastic skin bandage is nice, but ordinary activities like fetching keys from my pocket provide regular reminders of my clumsiness. And I am a whiny baby.

Other things from the previous week: out-of-town visitors departed on Thursday. We had dinner at Poppy on Wednesday and it was good, but kind of a lot. Not [only] in terms of pricing, just in being faced with eating ten tasty dinner items in a single setting. I really want to go back for drinks, desserts, and smaller bar foods. It's nice to have a shiny new place at the north end of Broadway.

Saturday night was a trifecta of musical charm from Cataldo, Dent May and his Magnificent Ukulele, and A.C. Newman at Neumo's. Though the Mississippians are correct about not being able to force a dance party, sometimes one arrives anyway. Both at Neumo's and then afterward at a house party that we were led to, champagne in hand, by the Pixels. Aside from a terrifying large white cat, the party and the people there were stay-up-all night fun times watching YouTube animal attacks, making incorrect cocktails, dancing to robot DJs, exploring strange rooms, and developing new zombie dance moves.

Sunday I had a few people over for an impromptu Oscar watch. The gathering and the ceremony were well received. With a few notable exceptions (the circus Beyoncé dance number, Adrien Brody reading Richard Jenkins's wikipedia entry, Braveheart being cut with Milk during the best picture montage, singing over the death reel), I thought that the show was exceptionally well done. Hugh Jackman's Sweding and the council of winners presentation for the acting award was a nice way to spice up the foregone conclusion of all but Sean Penn (which wasn't entirely shocking. For additional hilarity, we occasionally tuned into the liveSlog which won for its jokes about Sophia Loren in HD. 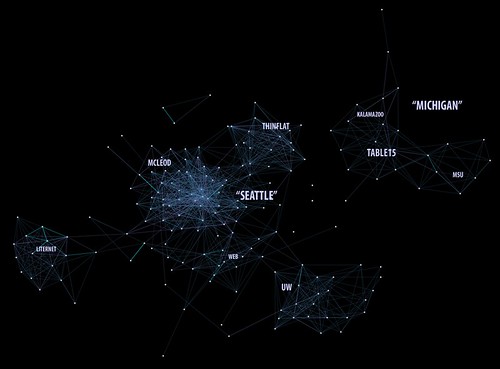