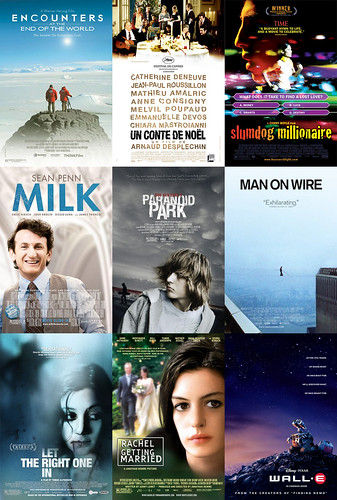 Because I so enjoy the year-end listmaking and photoshop collaging, some movies from 2008:
Encounters at the End of the World, Un Conte de Noel (a Christmas Tale), Slumdog Millionaire
Paranoid Park, Milk, Man on Wire
Låt den rätte komma in (Let the Right One In), Rachel Getting Married, Wall-E

This is kind of an odd list -- it includes one that I'm not sure that I "liked", one that won me over only a couple days later, one where I surrendered skepticism to another halfway through, and one where I'm just pretending that the last third didn't exist. But the Herzog one is just magnificent.

So, aside from the nice 3x3 look of this, that's partly why I went with nine even though there are other decent things -- for instance, Frost/Nixon,tout est parfait, Baghead, 4 months, 3 weeks, 2 days -- in my "consumed" list from the last year [allconsuming]. I still have high hopes for rearrangements and revisions after seeing some catch-ups and limited releases like the Wrestler, Gran Torino, Happy Go-Lucky, Synecdoche, New York, Wendy & Lucy, the Class, Waltz with Bashir, etc.
Collapse