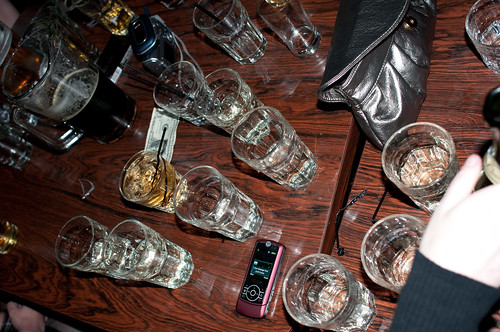 New year's eve started at the office. I left for a haircut and a sandwich and returned to find that I had little left to do and went home early to prepare for the new year. We were going to see the Woody Allen movie in the early evening, but Indian dinner started late and went long; so we just got a cocktail at Moxie before the vibraphone band started and I joined the party already in progress at Linda's. Yacht rock was playing, the buffalo was wearing a top hat, and a crowd was assembling. Our table seemed to play host to a delightful rotating cast of guest stars and occasional flash wars. Hastily-ordered champagne arrived a few minutes after midnight and we re-toasted. At some point I secured a flashing tiara from a girl who had invaded the men's bathroom, there was a bar-wide singalong to Toto, and shards of glass fell from behind. I left a bit after one, before the lights came on, in the middle of a cold rain.

We were back the next morning for brunch, followed by coffee and a scone at Oddfellows. That night, I saw Benjamin Buttons (sold out downtown; so we went to to the U-district with time for much-needed coffee instead). Stephanie Zacharek at Salon acutely summarizes my disappointment with it well by writing, "It's so almost moving -- a meticulously crafted mechanical bird -- that it nearly feels like the real thing." [salon]. Or rather, there was a point in the middle of its excessive running time that I thought that I was about to be won over, but then the mechanics, annoyances, logic, overbearing narration, and jarring flash-forwards broke it. At least it gave us plenty to pick over upon an evening return to Oddfellows.

Friday felt like an interrupted holiday: half-Monday, half-Saturday, fully disorienting. I ended up at the new Bus Stop with a big group of fun and a mission to retrieve late-night tacos before the end of the night.

The real weekend has involved cafes yesterday (first in a series of exiles while my kitchen ceiling was being frankenstein-repaired, and later meeting friends for tea) and brunch at Smith today. Tonight I think I'll try to see that Woody Allen movie while it's still playing. The other remaining options seem like too much intensity. 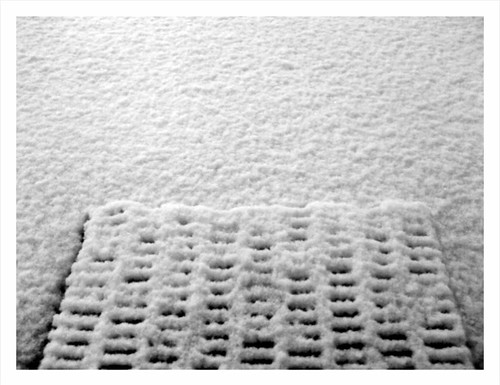 Another blizzard is attacking Seattle. The air is thick with snow and it seems to be sticking. Just when you think that the zombie presidential dollar coins couldn't get worse, they class them up with a painting of that has Zombie George Washington's dead eyes staring over Obama's shoulder. [obamacoincollection]
Collapse