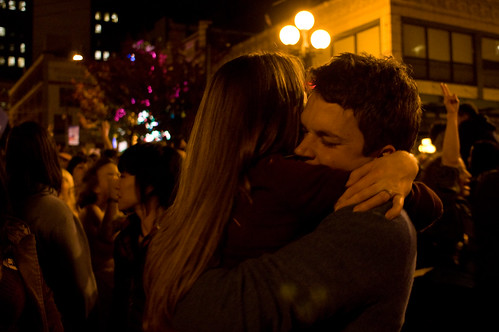 I was in the bathroom when the roar through the Showbox announced that Ohio had been called. From there, none of us needed pocket calculators, holographic advisors, or magic maps to read the writing on the three giant projected screens. Still, we waited in giddy disbelief under the glaring television lights watching the dominoes fall toward the west coast.

Even then, with the whole thing settled and the words "president-elect" being bandied about, tears and hugs and kisses and bouncing and smiles (we still remembered how to do that, it seems), it was hard to know what to feel or whether to believe completely. McCain's magnanimous concession left things more real and Obama's inspirational acceptance gave us permission to celebrate.

Somewhere along the line were Virginia and Florida, which felt especially significant. And as the crowds thinned and my cold medication wore off we got a second wind and danced wildly on the floor below. At one point, I asked the editor of the paper throwing the party to confirm that the whole thing hadn't been an elaborate hoax.

But the revelry was happening outside, too. Drums and people crowded streets, makeshift parades assembled. We went back inside, grabbed our things, and went up the hill to another party, to another intersection closed by friendly police, spanning city blocks and populated with glowing people dancing, popping bottles, singing, waving signs and flags. I don't think it was until they were lifted that we realized just how heavy the last eight years had been.
Collapse