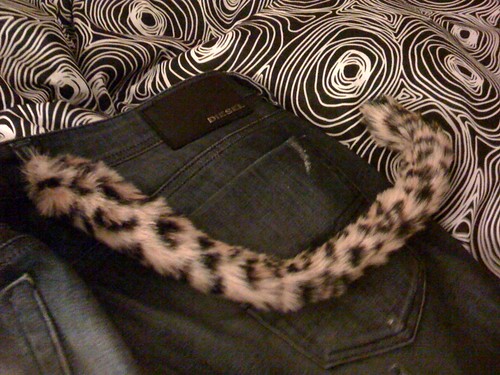 Friday night was Halloween and the last day of McLeod Residence.

It seems like forever ago that my flight back from CMJ was so late that I had to take my luggage and a cab directly from the airport to the Crocodile to see Islands. In the back bar (RIP, I think I miss that more than the club) after the show [flickr], running into the band and Buster and Lele turned into a trip across the street to to see the bare white walled space that would be transformed into a dream of an art gallery and clubhouse.

Just a few weeks and a couple sneak peeks later, I was walking down the hill with a dutch friend and champagne and whiskey in hand, pouring drinks to thirsty passersby from a fire escape while watching the Space Needle explode for the new year. There were a lot of slapfights, various trifectas (my second-favorite: "Hungry Like the Wolf" vs. "Since U Been Gone" vs. "Total Eclipse of the Heart"), lying on the floor (one time, it purred), spiced vodka from a card table with an blue bunny (head still intact) cash register. Later, a real bar, a red dress, a blue wig, a moose head, easter eggs. Bartending for jokes a year later. Fake names. Dissertation and birthday celebrations (two for me, one for an eight year old, one for a dog). Almost always, there was the joy of being a planning-averse introvert who could run into a wide range of new and old friends by chance on any given night. All of it often felt so effortless and perfect that the people who worked the hardest and put the most of themselves into it can't be anything but underappreciated no matter how hard we try.

And, so the last day of the month arrived and we met in our costumes across the street (for me, cat ears and a tail because it was the most hilarious thing I could think of for under $10) for a few drinks and cut through the mob at the door. Drinks appeared. There must have been some dancing, skilled crowd navigation and then it was closing time. A few of us retrieved all the cans, bottles, and cups we could find while people were shuffled out. With little left to do but drop our pants for the photobooth, we headed unceremoniously out into the street, and haplessly wandered back alleys knocking on the wrong doors until we found the next hazy party.

Aside from brunch, a grocery run, some work at a cafe (today), and an afternoon meeting (yesterday), I alternately slept and watched Mad Men through the rest of the weekend. The iTunes store is made for rainy Saturdays.
Collapse