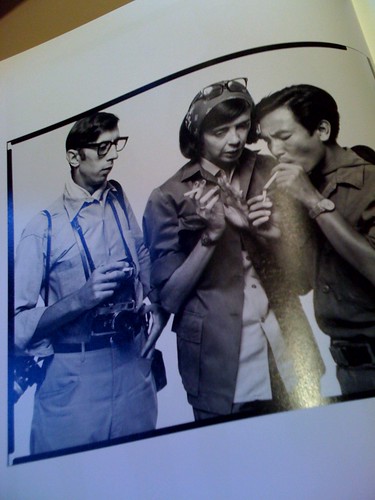 Seeing the Avedon exhibition before leaving DC. The entire collection ("Portraits of Power" [corcoran]) is just overwhelmingly awe-inducing -- a few of the images might even fulfill the beautiful, great, and kind trifecta.

Of them all, though, the little corner with Vietnam correspondents Gloria Emerson and Denis Cameron (backstory [ajb].)next to a poet/teacher Wendy Wilder Larsen were my favorites, possibly because because the faux-cinematic setting was offset and thrown dramatically into context by their placement across from a horrifying portrait of a napalm victim. I'd love to have a print, but that's near-impossible, so maybe just the book will have to do. [$]

So, I guess we are doing this now? I'm not in love with the service yet, but the iPhone app is nice and it works nicely with SMS codes; so let me know if you need a BrightKite invitation.

Last week, maybe, for the first time in I don't know how long I surprised myself and felt optimistic about the election. This was mostly in the context of thinking about when to go to election night parties (probably the Stranger's at the Showbox) and worrying that if it didn't start until six (it now starts at 4) then the election might be over before the party started.

Then, though, tonight I used my last bit of battery life to listen to last week's episode of This American Life on the flight back to Seattle from DC [thislife.org]. It was all about Pennsylvania: the union efforts to confront racism, the push to register voters in State College (which made me feel guilty about not being involved beyond campaign contributions, but also reminded me of 2004 and getting kids at shows to register and how it's really a game for the young and ceaselessly energetic), and lastly about the "Democrats for McCain". Listening to it, I couldn't help but feel a gnawing sense of terror and that when the revolution comes, these misguided minority of former Hillary Clinton supporters actively campaigning for John McCain should be the first against the wall.

Anyway, take a listen if you dare. Most of it is fairly inspiring.
Collapse