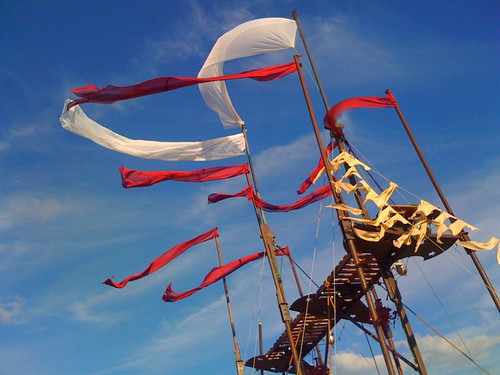 I took the train from the airport into the city (the JetBlue 9 am Seattle flight is near-ideal, timing-wise) and got to see a bit of Ellen's fancy office before going back to Brooklyn for pizza. After venturing out for coffee and breakfast, I spent most of the next day at the apartment doing some work, dodging a freak thunderstorm, and listening to CNN's commentators going on and on about the "mist" smog in Beijing. Once the rain stopped it was time to begin the journey to Liberty State park by way of Gimme! Coffee (actually good!) by way of a water taxi.

Aside from confusion about the location of Pier 11, the trip to All Points West was disorientingly smooth. We got through the gates just in time to catch the end of C.S.S., which gave us ample opportunity to situate ourselves for Girl Talk near some of the worst smelling marijuana of all time. Among the more phenomenal parts of the show were: hot cops using modified leaf blowers to shower the crowd with toilet paper, frenzied bouncing beach toys, giant plastic bags filled with air, local celebrity dancers, and a finale that had Greg Gillis crowdsurfing on an inflatable mattress. That last feat, with the energetic bouncing, nearly put Wayne Coyne's hamster ball walk to shame.

As soon as that show ended, people started running across the grounds for Radiohead. We took a few minutes to pick up some awful food (my first pick, a garbage-bound ill-conceived "burrito"). Radiohead, with their giant light curtains, visual effects, and very long, newish setlist were, of course, amazing. We took the boat back and watched some Olympic Opening Ceremony mind blowing fakery until we fell asleep.

The next day involved a late brunch and another series of trips across the water, this time with longer, more annoyingly crowded lines (the first ameliorated with plastic cups of beer) all around which caused us to miss the first part of Animal Collective. The parts we saw, though, were deafeningly great. Rather than seeing other things, we decided to gradually fortify our position during Kings of Leon to for optimal viewing / getting crushed to see Radiohead. Mostly successful, we also witnessed a few people passing out scarily. I had wondered whether I really needed two and a half more hours of Radiohead so soon, but then they dug out more stuff from the back catalog and I immediately saw the error of my self-questioning. We did eventually move further back, where we encountered a raver who was more interested in her glo-yo than the show on stage and weathered youths who thought that it was a karaoke experience (I mean, maybe you get to hear Thom Yorke singing "Fake Plastic Trees" once every five years. Why cover it with your own awful voice?).

We went through the whole thing again on Sunday to see Amadou et Mariam, who, aside from being blind and good, were sporting a really shiny gold guitar, a sequined dress, and killer sunglasses. Even some of the early-arriving Jack Johnson fans seemed to be won over. The rain reappeared and we sat under a tent listening to Rodriguo y Gabriela and contemplating the rest of our agenda. There were plenty of worthwhile acts on the bill, but not worthwhile enough to merit a day in the rain; so we got wet walking back to the boat and took a cab into SoHo where the cold, damp, weather made shopping for autumn seem reasonable. I picked up a sweater from Uniqlo and a light jacket, but resisted the temptation to wear them for the sake of warmth. While all of the boat travel lent the proceedings a certain sense of adventure and allowed us excellent views of Olafur Eliasson's Waterfalls, we kept having flashbacks to being at sea for the rest of the day. The weekend ended playing (and winning) a new-to-me at Black Mountain, which is among the most ideal wine bars I have ever encountered, with friends.

All in all, the weekend was fun, the weather cooperated by not being miserably humid, and the festival didn't really feel like a festival -- in part because we treated it it more like two days of Radiohead with some really good opening bands and a bunch of boat rides. Radiohead is playing near Seattle on Wednesday, and while I don't envy the terrible traffic-clogged drive, I can definitely see how their appeal justifies the trek.
Collapse