If this wasn't on the AP newswire, I'd have assumed it was from a Fark contest mashing up the Captain America shield, the presidential seal, an embarrassing Latin translation, and that weird Obama button. Slightly less bad than the new presidential dollar coins.

("via" my tumblr [svr], where I've been posting little tidbits like this just because it's more convenient.) 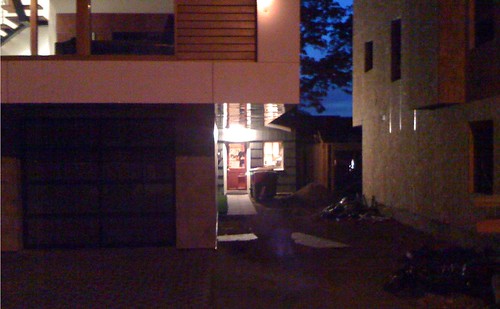 The thing about our gloomy spring is that now that it's summer, the days are suddenly long and without the gradual transition, one is tempted to carefully inspect the molars of this lovely gift horse. Or at least I am still finding it suspicious. It reminds me a little of last summer's trip to Europe where it seemed to hardly ever be evening. After several hours on the dock at Ivar's on Friday, I still had time to retreat to my apartment before walking down to the Cha Cha just before sunset.

Yesterday was a version of muggy for the parade in Fremont, where people have a startling amount of respect for the blanket. I brought a plastic cup of mimosa down from the party and that really helped ameliorate the shock of the slow moving crowds and the nudity and the hippies spinning with bubble makers or begging for hugs from the street. We wandered briefly among the fair with the art cars and the advocacy groups; the most tempting was the dealership selling Minis. Later that night, we reconvened to laugh at Get Smart and followed up with cheap happy hour items at a hotel sushi bar.

Today I did a lot of nothing. Brunch (hot tip: add avocado to the cowgirl taco!), watching mumblecore soaps on the internet (thx, salon), and reading. The early part of the week involved more midweek evenings out thanks to a houseguest from abroad; so a day mostly at home and a little bit in cafes wasn't unwelcome.
Collapse