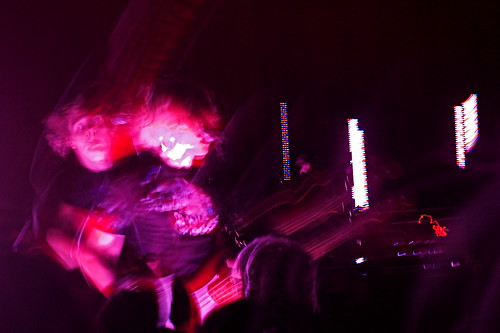 I got a bit sunburned yesterday afternoon not wearing sunscreen and having brunch at Linda's. It's hilarious how many of the same people who were there on Friday were back the in their same places thirty-six hours later, but this time with eggs.

Fearing sun poisoning from more than a couple hours outside, we went to see the Chronicles of Narnia. Luckily, I'd forgotten most of the book; so I didn't mind the changes. That, and I'm a sucker for talking badgers and hilarious mice. But Aslan is still kind of a little bit of a jerk.

Later that night, Tokyo Police Club wasn't the overcrowded sweatbox I'd feared it would be. This is one of the few possible benefits of the silly club crackdown. The show was great -- lots of seizure lights, catchy songs, and the guy on electronics, tambourine, keyboards, and random screaming is pretty much my indie rock hero. I guess this kind of adulation was right at home at the show. A pack of dudes in our general vicinity were in full-on touchy-feel bromance mode. It was really something of a spectacle; although we suspected they'd eventually start making out it never happened. Short loud songs.