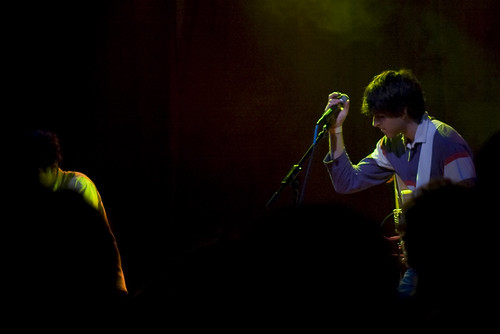 After having dinner at ViOS -- crawling kids, on the outskirts of civilization (or maybe just the Park Slope of Capitol Hill), and in the middle of a freak snowstorm -- I rushed down to Neumo's to see YACHT and Vampire Weekend. I have a certain affinity of freak-out motivational speak glitch rock, so I found YACHT as entertaining this time as when he opened for LCD Soundsystem. Vampire weekend started out sounding a little less loose and polished on stage compared to their album, but by the middle of the set they relaxed and finished strong with "Campus" leading into "Oxford Comma".

While waiting for the encore, I checked my iPod to see if they even had any songs left to play. There was only one, and they even broke out the disco ball to go along with "Walcott".

The guy behind us taught us a (patent pending) crowd navigation trick. It's called "Nebraska" and it involves buying two drinks so that people will let you cut through to the front. Then you end up in a good spot with a spare drink. Evil genius. No wonder he kept telling us that it was "(patent pending)". There goes his business model.