On the occasion of LiveJournal being acquired by a Russian media conglomerate [brad,news], let us briefly revisit "America We Stand As One" for just a moment. Small comforts, friends. 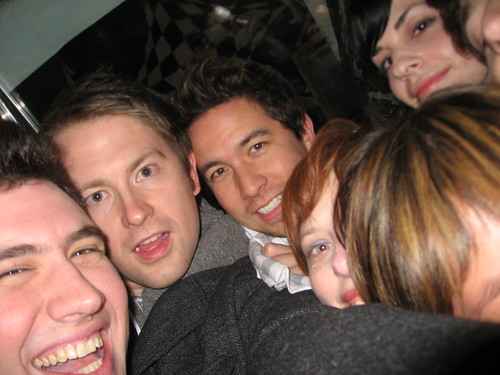 On the cold Friday morning, I went to a crepe stand on the way to work to pick up a couple shiny gold tickets for a wake. Anticipating the lack of a bar at the event, we first convened at 611 Supreme (another crepe place, but we did not eat crepes) and eventually claimed a cushioned corner where we could enjoy some drinks. After a while, we went to the dilapidated old apartment building that is slated for imminent destruction. Inside, with the exception of one room that had been preserved to illustrate the shoddy conditions, every surface and space had been transformed with art. We wandered around inside, and I somehow got paint all over my clothes. There was a performance on the rooftop, but I didn't get a ticket for that. When the drama was over, it was easier to persuade (or evade) the guard to gain access to the roof, which had been covered in dirt and flowers and wolves. A band was playing and people danced a little bit to stay warm.

Eventually, the orkestar went to the street and people followed, bringing the party outside. The police showed up and tried to be cool cops. i remembered the name of a guy who threw a different rooftop party and convinced him to throw me one of the cardboard wolves. I held it close for a while. I'm pretty sure there came a time when some of us were singing "Hungry Like the Wolf" with one of the officers who saw the cutout and doubted that we even knew the Duran Duran song. This, of course, could not be further from the truth.

Buster cast shadow puppets on the walls of the building using the cruiser's spotlight. Then a guy who seemed nice enough just grabbed the wolf and sprinted off into the night. Neither I nor the police officers pursued him. Eventually, idiots started throwing bottles and pounding on Dumpsters and we thought about finding food but all of the hot dog stands had closed. 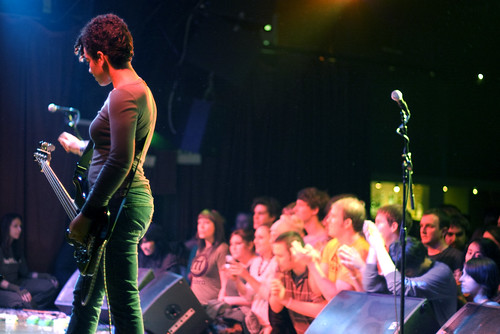 Unsurprisingly, the Thermals were excellent last night (and Arthur & Yu were charming, and Coconut Coolouts were maybe the most ridiculous but fun band I've seen all year). The striking thing about the Thermals is that it's really just the three of them on stage. Hardly any gear at all, which is a rare commodity. It seems like everyone brings along a melodica or a keyboard or a bank of electronics or a dwarf guitar for character these days. The audience, of course, went wild. I stood on the periphery of the teeming pit of moshing teenagers, partly because I brought a camera and also because I didn't really feel like getting knocked senseless.

My most favorite part of the show was when this extra-aggressive guy who'd been shoving himself through the crowd in a non-polite moshy way climbed up on stage with his camera. He squirmed away from the security guard and took a flying leap into the audience, but everyone just stepped out of the way and let him fall on the floor. A demonstration of collective karma assessment, I guess. Hutch even stopped the show for a minute to make sure that everyone was o.k.

My second favorite thing was when I noticed that the second most socially-inept mosher --- who couldn't quite figure out if he wanted to be up by the stage or crashing into everyone behind him --- had written "Ron Paul 2008" on the back of his grey striped polo shirt.

My third favorite part was that when the Thermals came back for an encore they played a Built to Spill cover. At first, I thought they were joking, but then they went ahead and played "Big Dipper" all the way through and it sounded great.