Because everyone keeps mentioning the "low bitrate" from In Rainbows, a quiz lifted from PC world that included some samples encoded at 128 and 256k [#]. Here's the Mozart portion of the quiz:

Open to: All, detailed results viewable to: All. Participants: 8 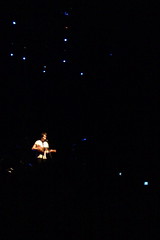 I was in Los Angeles for just under twenty-four hours this week. By an extremely happy coincidence, the trip spanned an evening when Beirut was playing at the Avalon. This, in an autumn without a Seattle stop on the Beirut tour. (I suspect that this was due to our strict drinking laws and the Crocodile's strict enforcement of them last time they were in town.)

I got to the show at little bit late because it started earlier than I thought and I hung out at the hotel's allegedly trendy bar for a bit too long while my cousin bought me whiskey and ate french fries, but I made it there in time for most of it. Compared to the not-that-exciting version on Gulag Orkestar, the live arrangement of "After the Curtain" was spectacularly joyful. Zach chatted throughout in French. Maybe affected, maybe practical. At the end came back and played a solo version of "Hallelujah" on the ukulele and everyone in the audience seemed to be singing along quietly, particularly at the parts where he forgot the lyrics.

The next day was spent at a lab or having meetings over meals at sort of fancy places. Beverly Hills is an odd duck.