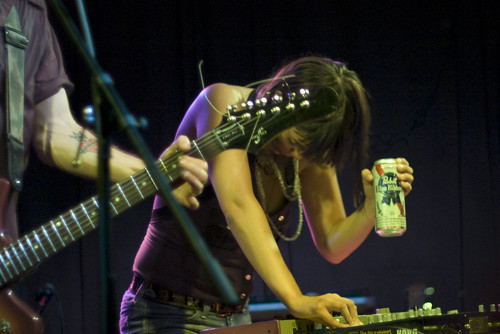 As you'd expect from Plague Park, Handsome Furs were really good. However, I left my apartment late and then spent too much time having a drink and watching haircuts across the street to see Johnny and the Moon, meaning that I missed out on my chance to complete a 2007 Wolf Parade spin-off band trifecta. After the show, we had drinks in the back bar and I heard about an article that left me feeling very worried about the Crocodile. I am hoping that it was just over zealous journalism and my inherent paranoia about things that I like.

Yesterday we tried to see 3:10 to Yuma but the Big Picture was sold out. Instead, we just had drinks at various places in Belltown, some less wretched than others. I slept a lot today, with breaks for laundry and watching part of a football game (possibly the only good thing about Notre Dame is that it means that there's a national broadcast of a MSU game) and Army of Shadows.

tomorrow, I'm seeing Gatz, which is both exciting and kind of scary.