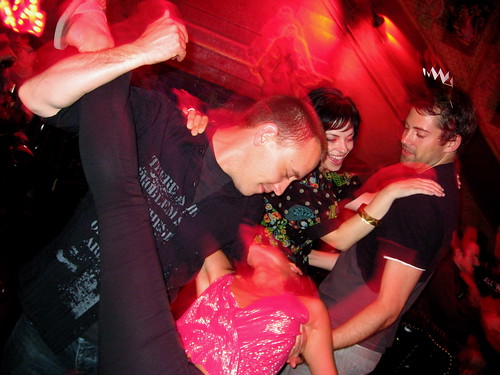 Despite my severe indifference toward my birthday, things turned out to be super fun thanks to what turned out to heroic interventions by a bunch of friends. I spent Friday working from a cafes and, later, a sunny park where tubes toobs were swaying, rising, falling, and threatening to swallow-up the lazy adults who stretched out for naps at their periphery and the bold children who ran into the center of their undulating masses. It was a highly photographed art event (kind of disgustingly so).

Next, it was time to send Peter off to Sweden by way of California by way of a fancy Oregon mall, by way of having dinner at Presse. Then, one last trip in the mini to take Samantha and me to McLeod. We were the first people there, but Chris and Buster started on their evening of collaborating to make bizarre, sweet (and usually tasty) beverages for me to drink all night. Soon, people started filtering in -- with snacks! and paper crowns! and Devo videos! -- candles were extinguished before setting the place on fire, bright blue cocktails were consumed, and then we were hailing cabs and going to the Cha Cha. There, they were playing a lot of hip hop and people were dancing (or maybe it was just us), which seemed weird for the Cha Cha.

Eventually, we were cast out onto the street and lured into the park. Before the clock struck two, Buster and Joe sprinted off to the grocery store to buy bottles of champagne. The rest of us waited on the lawn, passing the time with games of duck-duck-goose (or as Minnesotans would say, "duck, duck, grey duck"), somersaults races, and maybe some yoga poses. Drinking ensued, followed by a walk up to the water features, where it turned out that the foam bandits had struck again [mb], making wading a even better evening ending adventure.

I somehow almost got arrested for joking about public urination (all the toilets were closed! but really, I'm far too shy for that sort of thing.). The police were really really grumpy (which is maybe understandable, but they don't seem to mind if people's pets pee in the park, do they?).

I spent Saturday feeling terrible, in bed and on the couch, watching a half-dozen episodes of the Sopranos, eating saltines, and drinking a lot grape juice (one of the benefits of living a few blocks from a grocery and a video store).

Today was fine. I caught up on a bunch of the work I thought I was going to finish on Friday.
Collapse