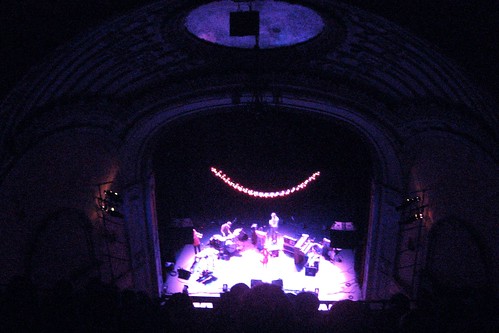 Feeling overwhelmingly introverted, generally unable to deal with other people (let alone beach parties) and the swimming pool at the gym too crowded to try to break the spell of anti-sociability through exercise, I decided to go home on Friday to clean my apartment, hope to find Top Chef reruns, and go to sleep early.

This pretty much lasted into Saturday, except that I ventured out for lunch with a friend at Victrola. This provided an exceptional occasion for visiting Sonic Boom and going to the video store to rent the middle of the third season of Deadwood. This was about all of the justification I needed for another evening of hibernation, though I was briefly roused from my slumber when a parade of lesbians marched past my apartment.

Sunday brunch at Linda's was followed with a hike up to 15th only to find that Smith didn't open until 4. We stalled for time at Liberty, though we had to run across the street to get some orange juice for mimosas to accompany a couple hours of flipping through magazines, becoming obsessed with cat pictures, and learning that it hurts to remove cheap press-on nails.

Eventually it was time to go to Smith and eat sweet potato fries (good, but the accompanying sauce was weirdly fishy) and deviled eggs in the presence of many taxidermized birds.

A brief break and then it was off to the Moore to see Grizzly Bear and Feist. Because we didn't have enough trickiness to turn one main floor and one second balcony tickets into to main floor tickets, we watched the concert from the nosebleed seats, which were incredibly uncomfortable folding wooden chairs. I think that Grizzly Bear is good, but even after seeing them three times in the past year, I can't figure out why so many people like them so much. I always feel like I'm missing something. Like a floor pillow and maybe some illicit substances.

Feist, on the other hand, is someone who has really nice albums but I think that her live show is far far better than her recordings. Maybe it's because she rocks out the easy listening songs more in person, enlists audience participation, and does really cool sampling tricks. I just can't believe that she didn't include "Secret Heart" on her setlist.
Collapse