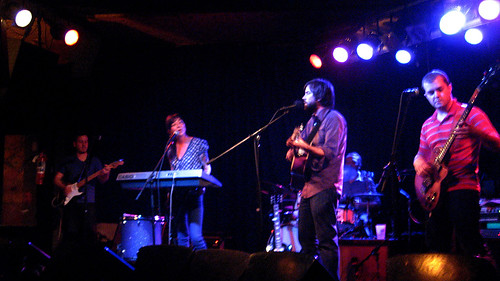 We tried pub trivia in the northern wilds of Seattle. We only did well enough to inflict a category on the next quiz even though we're not even sure if we'll be there. The previous loser-selected topic was Harry Potter and we requested a round about Anne of Green Gables, meaning that contestants are forcing the host into weeks of reading children's books.

Scheduling problems at SIFF meant that I missed Once when it played at the festival; so it was nice that it was already showing locally soon after. I thought that it was really good and suspect that it compares favorably to Music and Lyrics. For being a musical, it was just the right level of sweet and the scene where the guy (Glen Hansard) and the Girl (Marketa Irglova) are working out their duet ("Falling Slowly") for the first time in a music store was near perfect.

It fits into my potential new favorite genre: real life musicians playing fictionalized versions of themselves in low-fi economical films (see also Mutual Appreciation, which might be more fiction but lower production values).

After happy hour on Thursday, the Crocodile for A Sunny Day in Glasgow followed by Arthur & Yu. I didn't know much about them going in, but was really charmed by their performance. While they were playing, I thought about how they would go well with a picnic basket. For some reason, this made me think nostalgically about that amazing Cabrio commercial [youtube] where the four people go driving at night under a starry sky, not saying anything, and then wordlessly decide not to go into a perfectly reasonable party, opting instead to continue driving in intimate silence while looking beautiful.

That's sort of what I thought of Arthur & Yu, even though they sound nothing like Nick Drake. I like this picture from the table of contents for the issue of Vice [#] at our table at Liberty today way way too much.

We were trying to go to Smith, but they didn't open until 4. On top of that, the only way to get mimosas at Liberty was to bring our own orange juice.

There was also something about fake fingernails, but that was optional.

not quite as exciting: a woman biting a dog that's biting its own tongue [jpg | vice]
Collapse