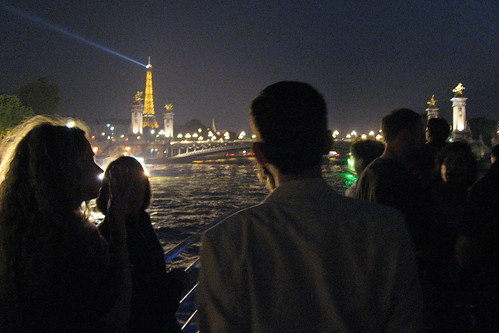 Another day of the meeting. At lunch, we sat outside in the sun near a small pond and looked at frogs, The general consensus was that it might be their mating season.

[some scribbles in my notebook defy deciphering]

The evening activity is a dinner cruise of the Seine with bateaux mouches. Nicole and I decide that we would benefit from walking to the boat rather than taking transit. The route is fairly direct and unconfusing. Along the way we both realize that neither of us has any sort of timepiece and each boat on the river suggests the possibility that we have lost track of time and ended up being very late. As we approach the dock, noticing a nightclub setting up shop under a bridge and fisherpeople returning to their shacks, it seems entirely likely that the cruise disembarked in our absence.

Instead, we end up being marginally early. The boat ends up leaving far behind schedule due to the tardiness of others. The whole thing seems cheesy and the food isn't the greatest, but the tour part is really very nice. At one point, the roving musicians onboard stopped at our table and played "Danny Boy", prompting the statisticians to sing along. As night falls, the ship turns on and floodlights, illuminating people dancing in a park on the left bank and kids drinking and eating fast food picnics on the edges of the Île de la Cité. Our return coincided with the Eiffel Tower going all sparkly and picturesque.

We mill about on the side for a little bit and then decide to go, through a convoluted series of Metro transfers, to Montmartre because someone wants to look at the Moulin Rouge, and partially to annoy the guy who thinks that the plan is stupid (which, honestly, it turns out to be). Looking at the neon windmill is about the extent of the visit; so we walk up the side streets to go to Le Sancerre, the TimeOut suggestion in the neighborhood whose description didn't involve the words zinc or industrial. It was nearly ideal for our purposes, and despite the crowds we managed to snag a table by virtue of being quick and having attractive women in our group. Our drinks all came with glow-in-the-dark straws. People on the street sold rings of popcorn.

After giving us such good advice, TimeOut lied to us about the Metro's operating hours; so we didn't even attempt to catch a train home. Instead, we wandered around on the streets for a while to consider a taxi until the option of a nightbus presented itself. Unlike the scary nightbus in London, this one took us almost exactly where we wanted to go and provided a mildly shoddy tour of the city. When we got back to the hotel, we couldn't resist one very late drink to close out our old pal Le Rotonde.
Collapse