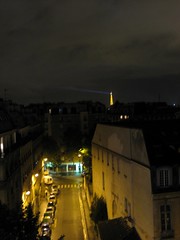 On the train from Charles de Gaulle, a pair of traveling musicians quickly hop aboard and proceed to set up their amplifier and electronics directly in front of me and my suitcase and perform for a couple of stops before moving along. This sort of thing has such potential to be annoying that I as happy to throw a euro into their coffers when it turned out to be incredibly charming instead.

Heavy traffic outside the city meant that I arrived at our hotel (appropriately called Hotel Americain) before the rest of the group. Further, an issue with the reservation meant that I scored the single room on the top floor. It was hardly perfect by conventional standards, but after a half-day's flying and traveling, it felt pretty perfect to stretch out on one of the beds, open the window, and read a few chapters of You Don't Love Me Yet while waiting for the others to arrive.

When they did, we walked to a nearby cafe and acquired some essential jet-lag fighting coffee and caught up on their week of road-tripping in the Loire Valley. Later, we went to the exceptionally nice apartment of a real Parisian to drink champagne before going to Le Clown Bar for a birthday dinner. There, we learned the first lesson of the importance of friendly quarrels for service (something hilarious among the French speakers about the desire for non-rare beef).

After an exceptionally long day, reading and falling asleep to the sound of raindrops on a metal roof was pretty great.
Collapse