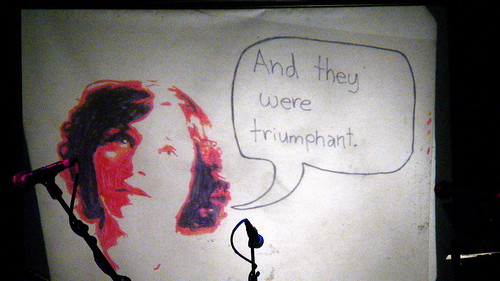 :: thursday ::
Miranda July reading at Neumo's. We arrived early to wait outside in the sun in the long line stretching out of the club and down Pike Street. Or rather, I arrived sort of early and cut in line, and got inside with plenty of time to buy some frites. Soon, however, the room was packed full and people were later turned away at the door.

Officially, it wasn't just a reading, but an extravaganza, complete with multiple musical performances. Sparkly Sarah Rudinoff sang, accompanied at times by Joshua Roman, the principal cellist for the Seattle Symphony who looks much younger than 23. Becky Stark (of Lavender Diamond) was really charming, and cutely funny between her quiet folk songs. "Awesome" was "awesome". They're a fun band, but I think I would appreciate all of their crazy instruments and enthusiasm a lot more if their lyrics felt more sincere. As entertaining as all of the prelude was, the highlight was definitely the part of the evening when Miranda July was sitting onstage, luminous, reading from her new collection of short stories. I'd already read one of the pieces, but hearing her reading them was fantastic. She has a special italics voice, and sometimes she takes your heart in her hand and squeezes it ever so slightly so that it momentarily stops beating. (Look! there's some video of the event on the internet! [slog] maybe, if you're the sort that gets motion sickness from slow quesionable panning, you should just listen to the audio. stick around for the interview portion at the end so that you can call me a crazy persom for writing the next paragraph.)

A thing that I consistently forget about myself is just how uncomfortable I sometimes find the questioning and answering onstage interview portion of these sort of events. This is something that I should know by now, but it is so easy not to remember it until it is too late and all that I can think about is wanting to find a way out of my skin as a means of escape. It is a weird sort of projected empathy, and I'm sure that watching art being flayed to tiny pieces before an audience, hearing the the contents of a person's wikipedia entry discussed publicly, and being subjected to agonizing either/or queries when the truth is "both" is totally unremarkable to most of the world.

This is all so stupid and melodramatic on my part -- I actually like things like Bookworm and Fresh Air. Maybe because I don't have to see the questioner and answerer?

I didn't brave the line to buy a poster or get my book signed because we were off to McLeod to drown the self-imposed the stress of the previous by drinking some whiskey for Eric Lashes.

nothing, really. Except a lot of looking at the internet to make plans for my upcoming eurotrip.

:: saturday ::
I finally signed up for gym membership so I had to go in for an appointment to be told to eat several small meals a day and to buy bottles of vitamins.

Then, up to Fremont to buy some wine for the department party. Followed by a trip to Archie McPhee's to help pick out prizes for the pinata. I'd never been there; so it was an exciting adventure. The store was less overwhelming than I expected. I made it out only having spent one dollar on myself -- a tin version of a russian propaganda poster that featured something about polar bears playing instruments and making music videos [!!]. I did not purchase a narwhal vs. unicorn set even though I really really really wanted it.

The party was at a mysterious location in Magnolia, with sporadic rain despite mostly clear skies, lots of food, survey games, pinata hanging, and other wholesome fun times. Up the hill, the neighbors had a very large "little" Space Needle in their back yard. [!]

I thought about napping the night away, but instead went to enjoy the new bar stools at McLeod. We hung out there for a while, then thought that food was a good idea. Walking down to Tavolata, a guy passed us wearing a bathrobe and accompanied by a woman who was not in sleepwear. Hazing ritual?

By the time we'd finished drinking champagne and eating fried polenta and grilled asparagus with a duck egg on top [!], everyone at the McLeod bar had exited; so it was a taxi ride to Linda's to race a pitcher to last call.

When the lights came up, no one wanted to go home. We found our way to an secret location where I was issued a tie upon entry [!]. With the other half of the party indoctrinated, we stumbled back into a smoke-filled hall complete with speakeasy performances, games of chance, backroom bar and all sorts of other excitement and running into surprising people.

Woke up with a terrible headache, feeling queasy from the smoke, and with a minor cut on my hand. [?] A late brunch, then back home to take advantage of the perfectly rainy afternoon by staying inside, reading, napping, and eventually venturing out to take care of a couple of necessary shopping errands.

Work and shopping for train tickets. I'm a little worried that the great price that I got on a ticket from Berlin to Amsterdam involves hidden terms and conditions, but it seems worth the risk. Then a quick haircut and back home to watch some season finales.
Collapse